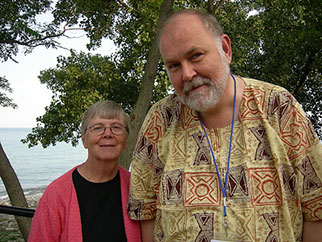 Following a 28-year career as a nursing instructor at the University of Connecticut, Edna became a volunteer missionary for the ELCA and moved to Liberia.

There she has been a witness to miracles.

“I knew about miracles, but I had never seen a miracle,” says Edna.

“Maybe I’m a person of little faith. But if you had seen the hospital when I first saw it and what it is today, you would say it is a miracle, too,” she says.

Curran Lutheran Hospital, where Edna serves as nursing program developer, was destroyed during Liberia’s 14-year civil war that ended in 2003.

Every day that went by without medical services represented loss of life.

“When I first saw the hospital there was no roof. It was just walls and all of the electrical wires had been taken out. There were trees growing up in parts. It was in ruins,” says Edna, who arrived in Liberia in 2004.

Curran is in Zorzor, a town in Liberia’s Lofa County. Although areas of Zorzor still look war-torn, Edna says it is a beautiful area.

When Edna began her service she lived in a home with no running water and little electricity. “I have running water now and enough electrical power to get things done,” she says.

The same is true for Curran.

Thanks to members of the ELCA Upper Susquehanna Synod and others across this church, Curran was rebuilt.

After Curran’s reconstruction, the Esther Bacon School of Nursing and Midwifery was reopened.

In April 2010 more than 30 students graduated from Curran’s nursing program and passed the national examination to become certified midwives.

“That is a miracle to me, too” says Edna.

“Nurses are the backbones of medical care,” according to John S. Lunn, an ELCA pastor and nurse working at the Christian Medical College in Vellore, India. John spends a quarter of his time serving as a health care specialist in Liberia.

With the shortage of physicians in Liberia, much of the responsibility for patient care falls on nurses.

To ensure nurses are well-trained, Edna and John have teamed up to start a master’s degree program in nursing education in Liberia. They hope that the program will help produce good nurses and good midwives. Edna developed the curriculum, and John recruited nursing professors from the United States to serve as faculty.

“We think Liberians deserve good health care. Nurses are with people 24 hours a day. No other health care professional is with people that long,” says Edna.

Seventeen students started the program in September. “We are setting high standards but will offer help. We want the students to succeed,” says Edna.

Edna has vowed to remain in Liberia for as long as she is healthy and invited to work by the Lutheran Church in Liberia.