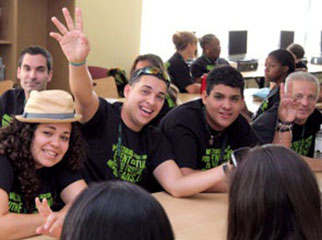 Amilcar Matos-Moreno of Zion Lutheran Church in Bayamon, Puerto Rico, (waving) says MYLE is "a great time to talk to new people and learn how they live the Lutheran life as I do in Puerto Rico but in another country."

For the students of St. John Lutheran Church in Kailua, Hawaii, the ELCA Youth Gathering taking place July 18-22 in New Orleans is sure to be a memorable experience.

Says Rebecca Duran, 21, who is serving as a youth leader for her congregation, “It’s definitely a huge opportunity for people from Hawaii to come represent and show our different cultures. A lot of times people are like, ‘Hawaii, grass skirts, hula dancing,’ and it’s a lot more than that.”

The 2012 ELCA Youth Gathering will bring 35,000 people to New Orleans for four days of worship, service and interactive learning. In addition to the Gathering, though, Rebecca, her pastor, and her youth group are also attending the ELCA Multicultural Youth Leadership Event, more commonly referred to as MYLE.

MYLE is a three-day event that takes place in the days leading up to the larger Gathering.

MYLE is designed to empower young people of color, as well as those whose primary language is other than English, to claim their identities and cultivate their gifts for the purpose of becoming transformational leaders in the church and in the world. This year the event was sold out with more than 500 youth in attendance.

MYLE’s theme in 2012 is a take on the New Orleans Saints catchphrase “Who dat?” The theme “We all dat!” is meant to express the inclusivity of the event. “As you can see, our group is diverse,” MYLE leaders said to the crowd at the opening festivities. “We are black, white, brown and red — We are all that!

MYLE is also an opportunity for multicultural youth to share their stories and learn about all of the cultures and ethnicities that make up the ELCA.

Amanda Duran, Rebecca’s twin sister, recently relocated to Missouri from Hawaii to attend college. Her experience made her appreciate the emphasis on sharing culture at MYLE.

“I think MYLE is really important. I know for me, moving from Hawaii to Missouri to go to college, it was a huge culture shock. Walking around, I felt like an international student,” she says. “Everyone in Hawaii is mixed. I feel like there’s a huge difference coming from Hawaii. All of my friends are like five different races. When I moved to Missouri everyone was just one thing.”

Amilcar Matos-Moreno of Zion Lutheran Church in Bayamon, Puerto Rico, also enjoys the opportunity to share his culture with others. “I’ve enjoyed meeting people,” he says,” people that think the same as I do, and the things that I do in my home, but in the States and other countries. It’s been a great time to talk to them and learn how they live the Lutheran life as I do in Puerto Rico but in another country.”

To share their cultures, MYLE attendees are getting to know one another in large- and small-group sessions as well as in worship and festivals designed to highlight the unique ethnic make-up of those gathered at the event.

John Thomas, 14, with the Unity Evangelical Lutheran Church youth group in St. Louis, says the large-group sessions are one of his favorite parts of the event. “I like the large group because there’s this one speaker who comes in and talks to us, and he gets your brain working. He talks about different ideas, like to be yourself and he has really encouraging words to help people when they go onto the streets to do what they have to do. It really gets me thinking about how their life is different from mine.”

MYLE youth are also partaking in their own separate service projects around the city. They will participate in everything from cleaning and painting schools, to promoting literacy, to learning about community health and grassroots organizations.

Megan Krone, 15, also of the Unity youth group, took part in a painting project. “We helped out with a mural, and we painted. It was cool. I liked seeing everyone work together.”

John agrees, “My favorite part would be getting out into the city and going out and helping the people that are out there with whatever they need — painting, handing out food.”

As the MYLE students prepare to wrap up their separate activities and join the larger Gathering, they’ve begun to reflect on how their time together will affect their experience of the larger event.

Kevin Kline, pastor of St. John Lutheran in Kailua, says, “I told the kids that when we’re here I want you to represent as much about the real Hawaii as you can.”

Says Isaac Johnson, 18, also of St. John Lutheran, “I came to MYLE to kind of renew and empower my faith and to have a lot of fun and, you know, meet a lot of other kids. Having fun with 35,000 other kids from church sounds like a good time.”