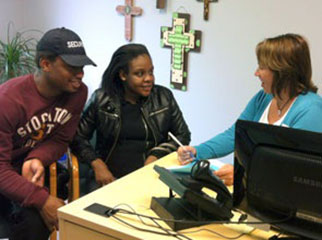 “Thank you, St. Andrew’s for helping us and praying for us during our time of crisis” are words workers at St. Andrew’s Community Resource Center hear frequently.

The center, a ministry of St. Andrew’s Lutheran Church, an ELCA congregation in Mahtomedi, Minn., is funded in part by a grant from ELCA World Hunger.

The Community Resource Center has helped over 750 families, provided over 5,312 shelter beds, served over 10,200 meals and given over 26,466 pounds of food to families living at or below the poverty line.

It is a place of hope for people of all ages and backgrounds.

“Hope is given through compassionate listening, case management — which helps develop an individual plan — guiding and walking with our neighbors in need during their time of crisis and continuing with them on their journey toward a new future,” say the directors of the center. “They are reassured that they are loved and that their lives matter to God and to us. For many of our guests, we are their only ‘family!’”

Many of the individuals and families were sleeping in cars or couch-hopping before they came to St. Andrew’s. Due to the number of homeless people living in the surrounding areas, homeless shelters must turn people away. St. Andrew’s is there when that happens. They average up to five families (20 people) per night at their shelter.

Angel, a single mother of two daughters, had to split up her family in order to give everyone a place to sleep. Following a divorce, her youngest daughter slept at her father’s house, her oldest daughter stayed with a friend from school and Angel had to sleep in her car.

“I really didn’t want to do it, but that was my only option,” Angel says.

After she saw a flyer for St. Andrew’s, she spoke with a case manager immediately, and they were able to provide her and her daughters with a warm place to sleep, food and resources until she was able to find a stable living arrangement.

“St. Andrew’s Church was able to provide my children and I with safe and warm temporary housing that will not only bridge the gap until the apartment is ready but gave security and stability back to my family,” Angel shares.

Kevin, a father of four, has a different story to share but was helped in the same way by St. Andrew’s Church. He and his family lived a comfortable, middle-class lifestyle until 2007 when Kevin lost his job due the downsizing of the company he worked for. He began to fall into addiction, and his wife was slowing fading mentally.

In 2009, they lost their home and were homeless with four daughters and nowhere to go. Kevin contacted the county, and they were able to provide them with emergency shelter in a motel for three months with food assistance.

At the end of the three months they moved into a rented house, which they eventually lost and were homeless once again. Following all of these struggles, Kevin and his family found St. Andrew’s Community Resource Center.

“One blessing to our family has been the St. Andrew’s Community Resource Center,” says Kevin, whose family is now on its way to living a stable life from the resources given to them by St. Andrew’s.

“We now feel like we can face these challenges with honor, integrity and hope,” he says.

Megan Nuehring is a student at Wartburg College in Waverly, Iowa, majoring in public relations and religion with a minor in leadership.