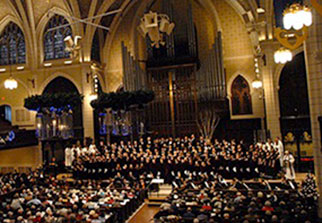 Augsburg College Advent Vespers, held at Central Lutheran Church in Minneapolis, is one of the largest holiday music events in the Twin Cities with over 10,000 worshipers participating annually.

Since the sixth century, the season of Advent has been set aside as a time of preparation for Christ’s coming. The word itself is Latin for “coming towards” (“ad” meaning towards and “vent” meaning “to come.”)

Through the years, Lutherans have celebrated Advent through a variety of traditions like the Advent wreath, a hearty symbol of the everlasting God on which four candles symbolize Christ’s light, or the Advent calendar, which often displays a colorful Christmas scene with each date of the Advent season printed upon a flap.

In other cultures and Christian faith traditions, though, there are some interesting Christmas and Advent traditions, some with deep cultural roots and others with curious beginnings.

Here are some traditions you may not have heard of:

1. Posadas — The word “posada” means “shelter” or “lodging.” This Advent custom, popular throughout the Spanish-speaking world, re-enacts Mary and Joseph’s journey from Nazareth to Bethlehem and their search for lodging along the way. The ritual lasts for nine days (Dec. 16-24). A group of people travels from house to house on a route, taking the role of pilgrims seeking lodging. Those inside the homes are innkeepers who refuse them. At the last home all are invited in for prayer and refreshments.

2. Jesse Tree — a family tree to the extreme! Each day of Advent a homemade ornament is added to the Jesse Tree, a small tree or simply a bare branch. These symbolic ornaments can each represent a prophecy foretelling of Christ. Other variations include creating ornaments that represent the ancestors in the lineage of Christ.

3. The Advent candle — In the late 19th century, Advent clocks or Advent candles began to make an appearance in many homes in Germany. Dates are marked in a row down the side of the Advent candle. Every day, the candle is lit and then burned down to the next date. By Christmas Day, the entire candle has been used.

4. Santa Lucia (St. Lucy) — is remembered on the 13th of December. On the morning of St. Lucia’s Day, the eldest daughters in households dress in white robes with red sashes and wreaths with lighted candles on their heads. They carry a breakfast of coffee, gingerbread cookies and sun-colored “St. Lucia” saffron buns to their parents’ bedrooms. The younger daughters of the household follow them carrying a single candle. Their brothers, called “star boys,” wear tall, pointed caps.

5. Paper lanterns — A tradition most likely adopted from Christian missionaries, in China, Christians light their homes with decorative paper lanterns.They might also decorate a “Tree of Light” with paper chains or flowers.