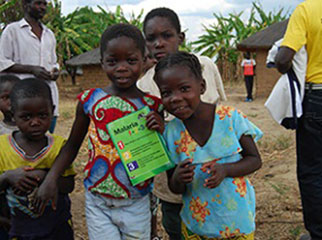 Children in Zambia learn about malaria.

There are a lot of misnomers about malaria treatment and prevention in southern Africa — particularly about the mosquito nets many organizations provide to people in areas afflicted by the disease.

“Some people fear that once you’re sleeping under that net, it’s like you’re in a coffin, you’re literally dead,” says Lucas Owuor-Omondi, who works with the Lutheran Communion in Southern Africa’s Malaria Programme, a partner of the ELCA Malaria Campaign.

Some people also believe children cannot be conceived under a mosquito net, “so if you want to conceive babies,” Lucas says, “you have to do it outside of the net, and of course the mosquito is waiting there for this new baby to be created.”

Others are distrustful of the health practitioners who take blood to determine whether people are infected, believing the practice to be linked to satanic rituals. And then there are those who find their mosquito nets to be more useful as fishing nets or covers for their crops or, in the case of one woman, a wedding veil.

The ELCA Malaria Campaign — an initiative rolled out by the 2011 ELCA Churchwide Assembly that works with Lutheran churches in Africa to prevent, treat and contain the disease by 2015 — is helping the Lutheran Communion in Southern Africa to create new programs in Angola, Mozambique, Malawi, Zambia and Zimbabwe. These programs are meant to change the way people think about malaria prevention by reshaping culture altogether.

“We cannot ignore the fact that within a poor socioeconomic group there is a higher possibility for a more severe attack by HIV and AIDS,” Lucas says. “HIV and AIDS and poverty work together. HIV and AIDS and malaria are good friends. They destroy — and destroy very fast.”

So in order to fight malaria, Lucas says, it’s essential to fight poverty.

In northwestern Zambia, for example, people are engaged in beekeeping but often aren’t connected to the marketplace to make money from their harvest.

“What the program has done is that through introducing the value chain component, they have linked these beekeepers with the appropriate people in the private sector,” Lucas shares, “and these people have now introduced a different way of keeping the bees in terms of improved bee hives, improved harvesting of honey.”

“But what is more important,” Lucas continues, “is that the program has linked the beekeepers with the market in Lusaka, which is the capital, and already some money has come back and people are already giving testimonies of the kind of difference that this has made in their lives.”

A similar program in Mozambique is connecting sugarcane farmers with ways to improve harvest and link up with manufacturers who can use the sugarcane in their products.

The idea is that as people are able to make a sustainable living for themselves, they will use their money to not only provide a safer, healthier lifestyle for themselves but also to contribute to improving the community. And perhaps with an improved quality of life, people will have more time to focus on learning more about and actively trying to prevent malaria.

“Through the gradual introduction of a high level of awareness, it is actually possible if that is backed up with a capacity to be able to afford that net,” Lucas says. “Our hidden agenda is that they’ll not just buy cars, that they’ll remember the nets.”