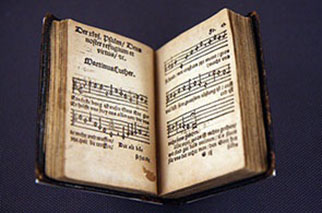 The earliest known copy of Luther's hymn, "A Mighty Fortress Is Our God," first published in 1529. This copy is the second edition, dating from 1533. Lutherhaus, Wittenberg, Germany

In honor of the 25th anniversary of the ELCA we have collected 25 facts about Lutherans and Lutheranism. This, of course, is only a small sampling from our almost 500-year history. Let us know what you would add to this list.