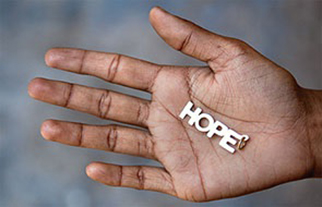 Hope is one of the most precious gifts of the Christian faith if not the most precious. Hope is the essential message of the resurrection, a message that is sorely needed in communities where there is such a preponderance of despair and where violence becomes how that despair is often expressed.

There were over 100 homicides in Milwaukee at the end of 2012. I am always hopeful that somehow we will learn from each of those deaths and the pain that it wreaks not be just upon those families it affects directly but upon the entire community.

The year 2013 began with a rash of shootings: five in one night and three would end in death. We continue to see the devastation of drugs and what it does not only to the people who are the consumers but to families.

I recently sat with a young woman who was in an abusive relationship. After a brief conversation with her I came to understand why her life had taken this path of destruction. Her father was not really a part of her life. Her mother was struggling with addiction issues. She got involved with prostitution for a while because of her addiction. The daughter would end up following in her mother’s footsteps.

Today this young woman is in a jobs readiness program because there was a faith community that believed in her. There is a non-profit agency that has given birth to a landscaping business that is looking to hire this young woman.

There is a young man, John S., who stands out in my mind from when I served as director of the Bread of Healing Empowerment Ministry at Cross Lutheran Church. He had lost his job because of an injury. The loss was difficult and began to affect how he viewed himself as a man. He had always worked. When his father left the home, he stepped in and found a job to help support the family.

John would come to the pantry at Cross because of the need to help with food. He learned about the weekly Bible study and the men’s group. Subsequent to his first visit to the pantry he was present each week for both the Bible study and the men’s group. When asked why he came, he answered, because it kept him focused on what he needed to do. John is now working a full-time job as a machinist making $19 dollars an hour.

When I met Jamie she was coming out of drug rehab. She had grown up in church. She was the product of a loving family but somewhere along the way she lost her way and became immersed in the darkness of crack.

Today she is five years clean. Talk to her and she will tell you that it was her faith and the community of the church that gave her the strength and the courage to come through her struggle. This Easter during the worship she gave her testimony. She wanted to do it on Easter because she feels that she has been brought back from the dead.

She tells her story often to those who are struggling with the demon of addiction as she did, not too many years ago. When I have heard her, I have been so moved, not just by her witness, but by the connection that she makes with those who are there to listen.

What does Easter look like in the city? It is not always clear.

The darkness sometimes is overwhelming. We are still facing massive unemployment and joblessness in the African American community. We are still seeing too many of our young black males going to prison. There is still too much blood of our children flowing in our streets because we haven’t found a way to address the violence that has been done to the human spirit. These are the challenges.

The good news is that there are faith communities that have made the choice to stay in the city and to birth creative ministries that seek to engage those who come with broken spirits, who come with wounds that have never been acknowledged or tended to. Make no mistake, the work in the city is tough. There are no magic bullets. The power and the presence of the church is often seen in the day-to-day faithfulness of these pastors and lay people who are convinced of the truth of the message of the story of Good Friday and Easter.

Death is a part of the landscape. But death does not have the last word.

Easter hope is reflected when faith communities join for a week of building with Habitat for Humanity.

Easter hope is found when faith communities unite to demonstrate for reducing the prison population and pushing for treatment instead of prison for those who are not violent offenders.

Easter hope is when faith communities open their doors to tutor students who are at risk.

No magic bullet, simply God’s people armed with the hope of Easter daring to live with the presence of God’s love and care in a place where the odor of death and despair is so strong.

“If Christ was not raised from the dead our message would be in vain” (1 Corinthians 15 paraphrased).