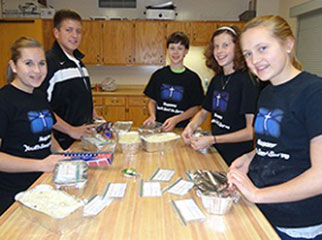 In March of 2012, I decided that I wanted to start my Girl Scout Gold Award project.

After thinking about a few project ideas, I began to look at my home congregation, Hosanna Lutheran Church, an ELCA congregation in Rochester, Minn. It occurred to me that most of the events for youth at my church were more for fun and not for service. So after talking with my pastor and youth director and after asking the chair of the youth ministry team to be my project advisor, I decided that for my Girl Scout Gold Award project I would form a new ministry team called Youth Sent to Serve.

The main goal of this ministry team was to provide community service projects for Hosanna’s middle and high school youth and friends. Another goal was to inspire youth to look at volunteering as a way of doing God’s work through service for others.

At the first meeting, my team and I decided that all of the service projects done in the first year should focus on hunger. The team also decided to educate the congregation about the prevalence of hunger in our community and in the world.

During this first year the Youth Sent to Serve team planned and helped with 17 service projects related to hunger. More than 40 youth and 20 adults volunteered, and a total of 278 volunteer hours were logged!

I am so grateful for all of the wonderful organizations that we worked with, and I believe that focusing on hunger was the right thing to do.

One in seven people in the world will go to bed hungry tonight! The problem of hunger is an international issue that will not solve itself.