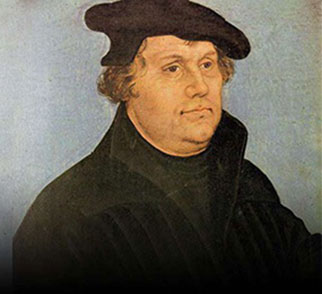 Voted number three in A&E’s “Most influential person of the millennium” countdown, Martin Luther was decidedly a major influence on western culture during the last 500 years.

1.) Luther didn’t eat worms at the Diet of Worms. A “diet” was a formal deliberative or imperial assembly. This diet took place in Worms, Germany, and is most memorable for the Edict of Worms, which addressed Martin Luther and the effects of the Protestant Reformation. It was conducted from Jan. 28 to May 25, 1521, with Emperor Charles V presiding.

2.) Martin Luther and Martin Luther King Jr. were not the same person! In fact, they were not even related. It is true that they both changed the worlds they lived in, both of them were reformers and
exceptional leaders and they both were men of faith.

Martin Luther was born on Nov. 10, 1483. He was a German monk, priest, professor of theology and important figure of the Protestant Reformation.

Be warned that many “sources” on the Internet confuse the two Martins. When quoting Martin Luther it is a good idea to cite the exact reference e.g., “Be a sinner and sin boldly, but believe and rejoice in Christ even more boldly, for he is victorious over sin, death, and the world.” — Letter to Philip Melanchthon (Aug. 1, 1521).

3.) Lutherans do not worship Martin Luther. Nor do Lutherans consider Martin Luther a prophet. Luther was a 16th-century man who was just as much a sinner as any other person. Lutherans are Christians who accept the teachings of Martin Luther and hold to the basic principles of Luther’s theological teachings, such as “Grace alone, faith alone and Scripture alone.”

4.) Martin Luther did not use tavern tunes in church. “Of the melodies to Luther’s 37 chorales, 15 were composed by Luther himself, 13 came from Latin hymns of Latin service music, four were derived from German religious folk songs, two had originally been religious pilgrims’ songs, two are of unknown origin, and one came directly from a secular folk song.” Data compiled from “Squire,” pp. 446-447; Leupold, ed., “Liturgy and Hymns;” and Strodach, ed., “Works of Martin Luther, VI”

The one secular song was from a popular pre-Reformation (not a drinking tune!) secular song, “I Arrived from an Alien Country,” and was used as the melody for the Christmas hymn, “From Heaven on High I Come to You,” the first stanza Luther patterned after the folk song. (source: Robert D. Harrell, “Martin Luther, His Music, His Message,” p. 18).

Since this tune was still being sung in taverns and other places for entertainment, it was not long before the reformers substituted a newly composed melody for the original. It is this new melody that survives as the standard tune to this day.

5.) Luther liked to drink beer. Luther had been known to frequent the Black Eagle Tavern where he went many evenings after supper for rounds of bock beer and lively debate. By 1527, Luther and his wife, Katharina, had established a household in a former monastery. With that much space, Katie Luther successfully ran a student hostel, farmed, raised cows and pigs and brewed her own beer.

6.) The discovery of Luther’s toilet was an important archeological find. “Luther refers to a secretus locus monachorum hypocastum or cloaca; that is the monk’s secret place, the sweat chamber or the toilet,” the American psychoanalyst Erik Erikson wrote in his best-selling book “Young Man Luther.” Despite Luther’s candid accounts of his daily battle with constipation, nobody knew the location of his cloaca (Latin for “sewer”).

The “secret place” remained unknown until 2004 when excavation work to plant a garden in the grounds of Luther’s house in Wittenberg brought to light an annex of his house. Among the remains, the archaeologists found a 9-by-9-meter (about 30-by-30-foot) room, a vaulted ceiling, and a niche with a 450-year-old toilet.

7.) Luther’s call to ministry was confirmed by a thunderstorm. In 1505 when he was in route back to law school after a trip home, Luther was thrown from his horse during a thunderstorm. Terrified, he promised St. Anne — the patron saint of miners and his family — that he’d become a monk. The rest is history.