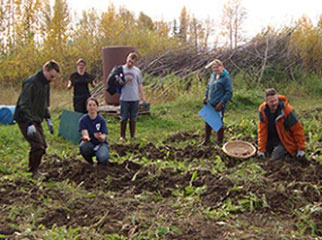 But thanks to a partnership between Trinity, ELCA World Hunger, and some enthusiastic students, the TLC Community Garden is working to change that.

Rolling up their sleeves

Students and teachers from the school approached Diane with the idea of starting a garden.

“We got together and talked about what we wanted to do and what we hoped the garden might be,” Diane says.

After plans had been made, the congregation and Next Step Day School broke ground in May 2011. The garden occupies unused land across the street from the church building.

“We wanted the garden to be a place where people could work together, learn from each other and provide food for others,” says Diane.

The planting, harvesting and delivery are all done by the congregation and students of Next Step. With a focus on learning life skills, the TLC Community Garden provides the opportunity for learning how to dry and can potatoes, as well as how to cook with them.

“The TLC Garden has been a learning opportunity for all of us, staff and students. It gave our students a chance to be providers, to help themselves as well as others,” says Carmen Thomas, who works as a special education assistant at Next Step.

The potatoes went to many beneficiaries: the families of the Next Step students, the families of the preschoolers in the congregation, various food pantries and to local homeless teenagers from the area who are welcomed into Trinity Lutheran Church on Sundays.

Before the delivery of the potatoes, the Next Step students prepared the potatoes for distribution and eating.

“I liked cooking the garlic mashed potatoes. That was my job. I also liked digging the potatoes and finding red and pink ones in the dirt,” says Victoria, one of Next Step’s students.

Cole, another student, shares, “I liked digging, cooking and eating the garlicky potatoes!” “I liked being outside to plant the potatoes. I also liked washing them,” says Stephen.

The goal of TLC Community Garden is to bring different communities together to learn from each other and facilitate interaction.

“This is a place where different communities who wouldn’t normally come together come together to garden and get to know one another,” Diane says.

Next summer, Diane hopes to make the garden more open to the community. The congregation has received a grant to construct raised beds. These beds will make it more accessible for people of all ages and disabilities to garden and join in the community.

Megan Nuehring is a student at Wartburg College in Waverly, Iowa, majoring in public relations and religion with a minor in leadership.