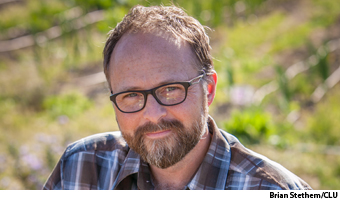 Picture this: It’s January in Minnesota. You go to the grocery store and buy strawberries. Not frozen, canned or jarred strawberries, but fresh ones — big, luscious fruits that drip with sugary sweetness.

OK, so these strawberries weren’t exactly grown down the street, but come on … what’s a little guilty pleasure for a sun-starved and shivering Midwesterner in the middle of winter? (Full disclosure: I’m from Minnesota and no doubt have eaten strawberries in January.)

The trouble is that the food in our grocery stores has “background.” It has been grown, harvested or slaughtered, processed, packed, shipped, distributed, stocked and shelved by the time we place it in our carts.

And at each step along the way, questions arise about the ethics of our eating. Questions that might complicate our customary ways of relating to food. Questions that also have theological dimensions, but ones most of us haven’t been asking since our food systems have become more technological, globalized and profit-driven. (See Food and Faith by Norman Wirzba; Cambridge University Press, 2011.) 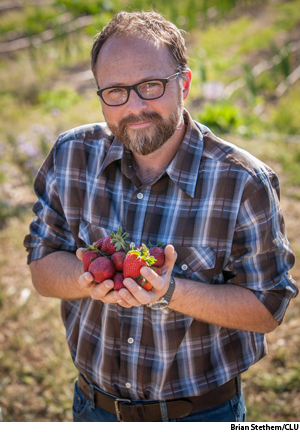 The strawberries, for instance: chances are good that those midwinter delights were grown in Ventura County, Calif., where that industry grosses around $600 million dollars per year.

To grow strawberries “conventionally” — that is to say, industrially — requires regular soil fumigation to annihilate pests and weeds. The standard, highly toxic soil fumigant methyl bromide has been used for decades but is phasing out because it degrades the ozone layer. Its hoped-for replacement, methyl iodide, was so controversially toxic that it was pulled from the market.

Other standard pesticides include compounds used as chemical weapons during 20th-century wars (such as chloropicrin) and the “neonicotinoids” that appear to be linked to bee Colony Collapse Disorder (see the documentary The Vanishing of the Bees).

Even when growers are careful and conscientious (and most are), pesticide and herbicide exposure remains a risk born largely by low-income (often immigrant) workers, who may live in “food deserts” where the very produce they pick and pack is unavailable to their families.

And from production to distribution, the whole operation is deeply dependent on fossil fuels, adding another layer of ethical complexity amid concerns about climate change.

I’m concerned in part because I live in a strawberry-growing area. Others might be more interested in how corn or cucumbers or chickens are produced. The point is not to single out a particular crop or kind of farmer but to encourage greater awareness of our food systems and practices. Because the “moment of truth” in the grocery store is about more than personal food preferences.

In light of Lutheran theology and ethics, it’s about how we as a community relate to land, to one another and to God, and how we translate our theological ideals into actions.

God’s covenant is with both people and the land, both of which are deeply connected to concepts of justice and rightly ordered community (Leviticus 25). Deuteronomy envisions that the covenant community is marked by being “blessed in the city and blessed in the field” (28:3-5; 33:13-15). And Isaiah cautions against “plowing continually” and not being well instructed in proper care for the land (28:23-26).

In the New Testament, the covenant with the earth and with human beings is presented most clearly in terms of the body of Christ and the eucharist — the “Bread of Life” has come for the sake of the entire cosmos (John 6).

Our vocation as human beings is to be good stewards of creation and seekers of justice (see the ELCA statements on “Caring for Creation” and “Economic Life” at www.elca.org/socialstatements).

A Lutheran ethics of food starts with the recognition that we are all part of systems that we create and support — either directly or indirectly — and ends with a hopeful account of what it means to be free in service to others and to creation. A Lutheran food ethics should include room to think and work toward the improvement of our systems, and to develop awareness of the background of our choices. Ethics is always messy, and it almost always involves tradeoffs.

I certainly don’t have all the answers to how we might make our food systems more environmentally sustainable and socially responsible. Some of the most ethically serious people I have met are farmers and ranchers, many of whom are in tough situations, often making trade-offs to remain financially viable. I have nothing but respect for people who grow food for a living, and yet I am also aware that often their ideals — theologically motivated or not — aren’t matched by the reality of our economics of food.

One of the best ways to engage the ethics of eating is to grow some food — in a pot, a side yard or community garden — or join a CSA (community supported agriculture). Get to know a farmer or two, and ask them about their experiences and learn from their wisdom.

Growing food and connecting to land and community are good ways to guarantee that at least some of the important ethical questions will remain at the forefront of our minds.

So does God’s grace extend to Minnesotans who eat strawberries in January? Of course it does. Does this mean there are not problems with that picture? No, it does not.


Thomas is associate professor of religion at California Lutheran University, Thousand Oaks.  He is the founding faculty advisor for the CLU SEEd Project (Sustainable Edible Education) and board president of the Abundant table Farm Project in Santa Paula, Calif., an Episcopal-Lutheran ministry that provides farm education for youth, fresh produce for schools and internships for young adults.