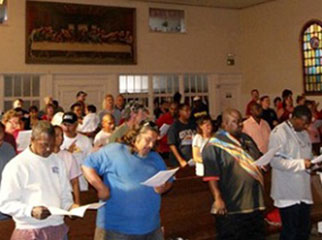 Central City Lutheran Mission, an ELCA ministry in San Bernardino, Calif., has been providing a safe place for people struggling with homelessness since 1994. It provides worship services, a program for people who are HIV-positive, contemplative prayer, English classes, a thrift store, a health clinic, aerobics classes, transportation to and from doctor’s appointments, job interviews and the grocery store — the list goes on.

For instance, David remembers a man named Tim who had shown up at the mission dejected and exhausted by his circumstances. “Through a whole series of things he had lost his job, lost his house, lost his car and had no place to be.”

Central City provided Tim with some clothes, a place to stay and hot meals, and it wasn’t long before Tim started volunteering around the building. Tim built up some work experience and then approached David and asked if he could staple the pastor’s business card to a job application he was working on. Tim got the job and then could afford to move into his own apartment.

“He’s going to value his job more than I value mine, that’s for sure,” David says. “He knows what it’s like not to have one. To me, it’s what redemption really looks like.”

To make all of these services possible requires a lot of dedication. “It’s very life-giving in many ways to work with people on the street,” David says — but it’s hard work, as well. And it can’t be accomplished alone.

And thanks to a new ELCA ministry, David’s network just got bigger. In the fall of 2012, 14 ministries from across the country came together to form the ELCA homeless ministry network. The network is designed to bring together ministries that both work to alleviate homelessness and also to empower people who were and are rendered homeless to serve others as a part of the church.

“People experiencing homelessness are just as equal as any other baptized believer,” says Ruben Duran, who directs the initiative. “Each has a story, but when you put these together, all of a sudden there is a voice that is much needed in the ELCA. It is going to energize us as a church because of what the Spirit is doing through these people.”

“I think there’s great potential to share ideas and support,” David says, and he’s looking forward to more opportunities to connect with those who have the same heart for homeless ministry that he does. “I’m anxious to see where it goes.”

Elected this year to lead