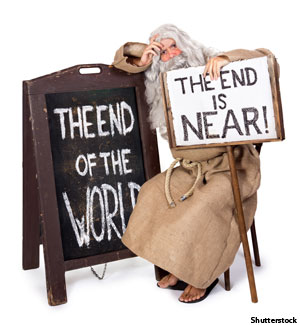 If a pollster asked you about the likelihood that Jesus Christ will return to earth in the next 40 years, how would you answer?

According to a 2010 survey by the Pew Research Center on “Life in 2050,” a majority of American Protestants believe Jesus will “definitely” or “probably” return to earth by that year. One-eighth (15 percent) responded that they “don’t know” — even though that is the answer most in accord with Jesus’ own teaching.

Recent end-time billboards and predictions — whether radio preacher Harold Camping’s May 19, 2010, prediction of the rapture or the supposed Mayan apocalypse for Dec. 21, 2012 — heighten people’s fascination with the end of the world. A prophecy industry of video games, comic books, websites, television and novels capitalizes on our culture’s desire to figure out how and when the world will end.

But the Bible teaches we can’t know the timetable of Jesus’ return.

The return of Jesus is a central teaching in the New Testament and is foundational for Lutherans and other Christians. But this isn’t the same as the rapture, a word that isn’t in the Bible.

I first heard about the so-called rapture in college when fundamentalist Christian students tried to convince me that if I did not embrace the theology of Hal Lindsey’s 1970 book The Late Great Planet Earth (Zondervan) I would be “left behind” when Jesus returned.

Similar fears about Jesus’ second coming have been instilled in young people more recently by the “Left Behind” novels, a fictional series set during the supposed seven-year period around Jesus’ coming in the so-called rapture.

The entire rapture notion is antithetical to traditional Christian theology. While proponents claim the rapture is based on a literal interpretation of the Bible, they employ a highly selective pick-and-choose literalism. This theology was invented less than 200 years ago, but it has gained prominence in American culture through televangelists and radio preachers. Rapture theology raises questions about the Bible’s view of prophecy, violence and even Middle East policy. This theology should be challenged and replaced with a more biblical understanding of Christian hope for the future of the world and of Jesus’ coming again.

The notion of the rapture, or a sudden snatching of Christians up into the air, was invented in the 1830s by British preacher John Nelson Darby, founder of the Plymouth Brethren. Darby took the traditional understanding of Jesus’ second coming and divided it into two parts: first the so-called rapture, when he said Jesus would hover above the earth and snatch born-again Christians up to heaven for seven years. Then, according to Darby, after the rapture God would inflict seven years of tribulation upon the earth while Christians watch from heaven.

At the end of that seven-year period of death and destruction, rapture proponents believe Jesus will return to earth again for the third time to fight the battle of Armageddon and set up an earthly kingdom.

Proponents come up with their rapture chronology by cobbling together a reference in the Latin translation of Paul’s first letter to the Thessalonians, with three verses in Daniel and a verse from Revelation.

Such pieced-together timelines aren’t biblical. The New Testament describes Jesus’ coming in a great variety of ways. Some biblical texts focus on heaven, some on earth. Some verses focus on judgment and others on salvation.

In the Gospel of Luke, Jesus describes a banquet with the Old Testament prophets while in Matthew he depicts a marriage feast. Other verses describe Christ’s future coming in terms of a paradise or fields of green pastures, while others depict a wonderful city with golden streets. Some passages emphasize Jesus’ coming to us daily in the sacraments, while others emphasize the “not yet” of his future coming.

God’s promises about our future hope are rich and varied, more lavish than we can possibly imagine. As New Testament scholar N.T. Wright notes in Surprised by Hope: Rethinking Heaven, the Resurrection and the Mission of the Church (HarperOne 2008), what is important is “the entire sense of God’s future for the world and the belief that the future has already begun to come forward to meet us in the present.” Most importantly, God promises a relationship with us that never ends.

Rapture theology can be especially problematic if it leads people to think God plans to destroy the earth. To be sure, Scripture promises judgment and a “new heaven and a new earth,” but this doesn’t mean God will destroy this earth and then give us a replacement. God created this world, God loves it and God will never leave it behind.

What will Jesus’ coming be like? What does it mean to “look for the resurrection of the dead and the life of the world to come,” as we say in our creeds? The Bible tells us we cannot know. Indeed, Jesus warns us against trying to figure out the details of an end-time chronology that he says even he does not know.

Jesus tells his followers: “About that day and hour no one knows, neither the angels of heaven, nor the Son, but only the Father” (Matthew 24:36). Jesus doesn’t intend for us to piece together Bible verses to construct a detailed timetable. We are, however, exhorted to be urgent in mission, urgent in our waiting, urgent in caring for our neighbor and for the world God loves.

In my research I found that one reason people are so drawn to end-time predictions and prophecy timelines is the desire to experience the Bible as coming to life. People long to see connections between the Bible and their lives. End-time preachers and prophecy buffs generate excitement by drawing arbitrary correlations between the Bible and wars in the Middle East, natural disasters and other events in our lifetimes, claiming these were predicted in the Bible.

Scripture is coming to life in our world and in our lives — but not in a series of scripted disasters and wars. The Bible comes to life most of all in life-giving moments of hope and healing. We experience the message of the Bible and Jesus’ coming by opening our eyes to see God at work in the daily events of our lives. As we await Jesus’ coming again, we can give our own bold testimony to how God comes to us in sacramental presence and in our day-to-day experiences.

We can learn from early Christians how to live while we wait for the end-times today. Early Christians definitely thought they were living at the brink of the end of the world.

Love of neighbor and hospitality to strangers was early Christians’ surest response to life on the brink of the end-times. They gathered and worshiped God. They ministered to the poor. They visited prisoners. They broke bread together, they sang hymns. Early Christians nurtured community. By their lifestyle of love and welcome, early Christians resisted the claims of the empire. People around them marveled at their joy and boldness.

To look for the coming of Christ, and to live in urgency, means to share God’s love for the world. “Thy kingdom come, thy will be done, on earth as in heaven” is what Jesus taught us to pray. It is not a prayer to take us away from earth but rather a prayer that God’s reign will come to earth — and that it will even come through us, as Martin Luther explained in the 16th century.

Will Christ return before the year 2050? If a pollster asks that question I hope you will respond with confidence, “I don’t know” — and cite Jesus’ teaching in Matthew 24:36 as proof.

Barbara Rossing
Barbara Rossing is a professor of New Testament and the environmental ministry coordinator at the Lutheran School of Theology at Chicago. She is the author of The Rapture Exposed: The Message of Hope in the Book of Revelation (Westview Press, 2004). She is an avid hiker and wilderness enthusiast and has served as pastor and teacher at Holden Village retreat center in Washington’s Cascade Mountains.