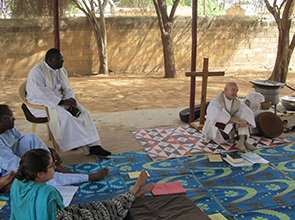 Themba Mkhabela, in the chair, participates in a worship service in Linguere, Senegal.

The history of the Fulani people in West Africa dates back to before the ninth century. They were the first group on the African continent to convert to Islam, and they have been prevalent in many West African countries ever since.

“This group is really unique,” says Themba Mkhabela, the ELCA’s regional representative in West Africa. “You find the people throughout West Africa. They are predominantly cattle herdsman. Some travel from region to region. They go through countries, across borders, looking for places to graze their cattle. Some countries have sort of an understanding with them so that their cattle can start in one country and cross over into another country.”

The ELCA has had a long and rich relationship with the Fulani people. Years ago, ELCA missionaries co-founded an organization called the Joint Christian Ministry in West Africa, which now works with other Christian denominations to bring together Fulani Christians and churches. The members of these churches offer the Fulani people in West Africa mutual support, sharing of experiences and mutual learning.

Converting to Christianity from Islam is no small decision for a Fulani person. “Being Muslim is not only a religion but a cultural identity,” Themba explains. “Many of those who convert are persecuted by their own people, families cut ties with them, and as such they need some kind of support group that will help them out.”

Recently during a trip to Senegal, Themba and Thomas Magadji, the general secretary of the Joint Christian Ministry in West Africa, tried to provide that support as they sat down with a group who had converted to Christianity over the years.

“We had an opportunity to spend time sitting in the shade drinking local tea and local yogurt, listening to amazing stories of Fulani who live in a world that often views them with curiosity and, at times, even skepticism,” Themba shares.

“They told stories about the challenges they face because of their courageous act in a world where Fulani are thought of as Muslims by birth.” In Senegal, Themba points out, there is peaceful coexistence between Muslims and Christians — which is not the case in other parts of West Africa.

Themba remembers one man in particular, Malick Sy, who was keenly aware of the pressures he faced. He told Themba, “The majority of Muslims in Senegal are looking at [those who have converted] because they can’t understand why they chose to become Christians.”

Generosity that makes a difference

In 2012, Themba was also in attendance when Ousmane Diop became the first Fulani man to be ordained by the Lutheran Church in Senegal. Ousmane’s education was funded in part by the ELCA through a scholarship from the Joint Christian Ministry in West Africa.

The ELCA in conjunction with Mission Africa (a Norwegian mission organization) is also providing a scholarship for Daniel Dama, a Fulani pastor. Daniel is studying music at Fuller Seminary in Pasadena, Calif., and he has been commissioned by the Joint Christian Ministry in West Africa to compile the first Fulani hymnal. The ELCA and Mission Africa have jointly funded the inception of the hymnal project.

This support from the generosity of ELCA members through their Sunday offerings and through direct gifts to ELCA Missionary Sponsorship is making all the difference in the lives of the Fulani people.

“It gives me great joy and unparalleled fulfillment to tell the story of how we, the ELCA, are actively engaged in the ministry which helps to strengthen and to walk with Fulani Christians in their journey of faith,” Themba continues, “and how we together with our companions endeavor to serve the Fulani people in West Africa.”