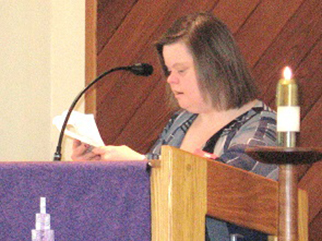 People of all abilities can be involved in worship.

Before studying to become a diaconal minster, Susan Lindberg had worked for nearly 15 years supporting people with intellectual and developmental disabilities.

“As a diaconal minister, I’m called to serve between the church and the world, and to bring the needs of the world back to the church,” she says. So given her experiences with people who have disabilities and her ministerial training, her path seemed clear.

It was with this in mind that Susan founded All Right Ministry, a worshiping community in Wayland, Mass. supported in part by a grant from the ELCA churchwide organization.

All Right Ministry strives to create spaces where people with and without disabilities can come together for worship experiences where all can participate. To do this, Susan spends much of her time traveling throughout the church coaching congregations and individuals to create more inclusive environments for people with a variety of disabilities.

Then, once a month, she leads a service at Peace Lutheran Church, an ELCA congregation in Wayland, where anyone who wants to can participate.

Susan says many of the people who attend the service are excited to get a chance to participate. For instance, she says, there’s a teenager with autism whose role it is to say, “Go in peace; serve the Lord” at the end of each service. Another woman loves to extinguish the candles after worship.

Other members enjoy the opportunity to play maracas, sing and dance.

After the group worships together, everyone sits down for a meal. “We get to know each other, and we find out about each other and see what people’s concerns are and what their joys are,” Susan shares.

And the relationships they are building are making a difference in the lives of people who often feel disconnected. Recently Susan heard about two women from the ministry who ran into each other at a supermarket.

“There’s this one woman with an intellectual disability, and this other woman has seen her a couple of times around the city,” Susan remembers. “She saw her at the grocery store and she yelled, ‘I love the Mass!’”

“People feel free to be who they are,” Susan continues. “That’s kind of a huge beautiful moment to think that they’re connected with their faith.”

“If someone calls out during a service, yeah it might be a little noisy, but what the heck? It’s more joy, more worship in the church. Sometimes somebody might want to get up and walk around during the service. People hear and learn and listen differently. It’s kind of getting to know people.”