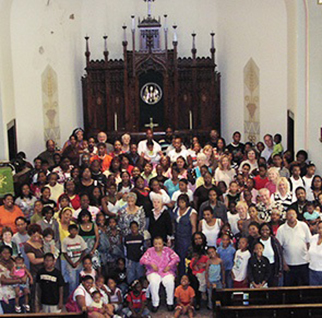 Hephatha Lutheran Church is an inner-city congregation in Milwaukee and is a part of the ELCA Greater Milwaukee Synod. On Sept. 29, 2013, Hephatha celebrated 100 years of ministry. I was invited to be a part of the celebration as one of the pastors who have served that congregation.

Hephatha struggled for many years. When I was called to that parish in 1986 it was already struggling to survive. The neighborhood had essentially changed from predominantly German to African-American. The transition of the community reflected the transition in the congregation. There was a brief but poignant interchange that happened on the day that I was installed.

As I was standing in the receiving line a man, one of the few remaining White members, came through, took my hand in his and said to me, “You are the pastor who is going to bury me.” Later, while visiting him in his home, he would elaborate. He talked about getting calls from some of his friends who had left Hephatha and they wanted to know when he and his wife were going to get out of that place and leave it to those Black people. The language used was not as clean as mine. But he was clear that he was not going anywhere. He had a history with this church. He loved this church, and the new people who were now in the neighborhood and in the congregation were his brothers and sisters.

A year and a half after I was installed I did have the privilege of presiding at his funeral. In 1988 I would leave Hephatha to serve on the synod bishop’s staff. The congregation would continue to struggle.

There was another individual who followed me. It was a difficult time. That person would leave after a short time. Things looked bleak until the call of Mary Martha Kannass, a White female pastor who actually grew up in a suburban community outside of Milwaukee. She would serve her internship at Reformation Lutheran, another congregation in the heart of the city. Who would have thought that this match would have worked? But it did, incredibly.

The challenges in the community were numerous: drugs, crime, violence, schools that were failing our children, poverty, men and women struggling with issues of addiction. All of that, but Pastor Mary waded into the deep — into the thick of those issues. She invited her congregation to join her in reaching out into those places of death to bring life. She would turn Hephatha around.

She did it the old fashioned way. She did it by loving people up. She loved the broken into healing. She loved the addicts into a journey of sobriety. She loved children who came from broken homes, from homes where drugs were being used by parents and the adults who were in the house, she loved them to a place of worth and somebodiness.

I sat in worship on the Sunday of that congregation’s anniversary, in a congregation that I had served briefly and where I grew weary waiting to see a full sanctuary. Forty children came up for the children’s message. Sunday morning is filled now with folks who have been touched by the ministry of Hephatha and by the grace, persistence and hospitality of this amazing servant.

Through her persistence, drug houses have been razed and Habitat homes have replaced them.

Through her persistence, the neighborhood school has become a partner; it is because of the partnership between congregation and school that children who were once failing are now succeeding.

I remember meeting with a congregation in an urban community and feeling their anger surrounding the new community that had moved in around the church. The remaining White members had only negative things to say about the people who lived in the neighborhood. Several of them would describe the people who came in to receive food from their pantry as “users.”

As I listened to many of these members I was prompted to ask: “How do you serve people that you do not love?” I am convinced that the thing that made such a huge difference in the transformation and rebirth of Hephatha was the spirit of love that Pastor Mary brought to this ministry that was on life support. It was that spirit of love that led her and leads her and that leads this congregation and that has made their witness such a powerful witness bringing light and hope for so many of God’s people.

Ken Wheeler
Ken Wheeler is a retired pastor. He most recently served at Cross Lutheran Church, an ELCA congregation in Milwaukee, where he is now the director of the Bread of Healing Empowerment Ministry. He served 18 years as an assistant to the bishop of the Greater Milwaukee Synod of the ELCA.