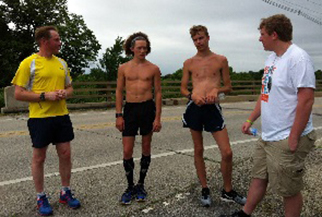 Scott Van Daalen, Brad Wylam and Ethan Wise didn’t want the summer of 2013 to be just another summer.

“We just kind of started talking and decided that we wanted to make a difference and do something that was bigger than ourselves this summer,” Scott explains.

The three 17-year-olds from Waverly, Iowa, all attend congregations that are working to prevent and treat malaria. Scott and Brad attend Redeemer Lutheran Church, an ELCA congregation in Waverly, Iowa, and had heard a lot about the ELCA Malaria Campaign — an effort aimed to help prevent, treat and eradicate deaths from malaria in Africa.

Ethan is a member of a United Methodist congregation in Waverly. The United Methodist Church is one of six full communion partners of the ELCA and also has a malaria campaign, called Imagine No Malaria.

Brad and Ethan are both cross-country runners so, Brad shares, using their passion to make a difference seemed like a natural fit. “Scott came up with the idea about running across the state. We wanted to do it for a reason, so we were kind of looking at different charities and stuff like that, and we settled on malaria because both the Lutherans and the Methodists were kind of focusing on it.”

Scott got to work organizing a campaign. Brad and Ethan would run while Scott would drive with them, networking with local congregations and educating people about malaria. They dubbed the trip “Running from Malaria” and started a website and a Facebook page to spread the word. Then on June 11, they started their journey.

“It was 350 miles and 21 days,” Scott says. “We started in Hole, Iowa, which is really, really northwest, and we went across and averaged about 15 miles a day.”

“Normally we’d wake up probably like 7-ish,” Brad adds. “One of us would start running. The other one would start on the bike. We’d just switch off and pretty much stop when we got to the car that Scott was driving, refuel and get Gatorade or Powerade or water and just a short little break and do that to the next town.”

At the end of each day, the boys would end up in a town where a local congregation hosted them for the night.

“People were just really generous to us and really excited,” says Scott. “What we did is we usually had some sort of event at each church where we would speak, and we’d have members of the congregation and community come in, and we’d have like a bucket or something where people could leave money.”

Visiting with congregations not only gave the guys a chance to share about the malaria campaign, they also got an opportunity to hear from others who had been affected by malaria.

“It was kind of cool just seeing how people supported us along the way and how they had some type of connection with malaria, how like different people would come back from like World War II and find out they had malaria,” says Brad.

“I think just getting to know all the different host families each night, talking to them, we found out a lot more people had stories about malaria than we thought,” Scott adds.

The boys ended their journey in Dubuque where they met up with friends and family to celebrate.

“When we were starting to get into Dubuque, it was really hot and humid and hilly. We started picking up the pace a little bit just knowing that we were at the end,” says Brad. “We finally saw the church that we were going to end at, and there were a bunch of people there.”

“There were different people we met kind of along the way that were there,” he continues. “It was cool to see that they took the time to drive out and support us.”

Throughout the course of their journey, the boys raised more than $11,000 and got an opportunity to discuss malaria with people from all walks of life.

“I know for me, it was really crazy just that we are able to accomplish it,” says Scott. “It was really cool for us to see that all these people were backing us up and we had all their support.”