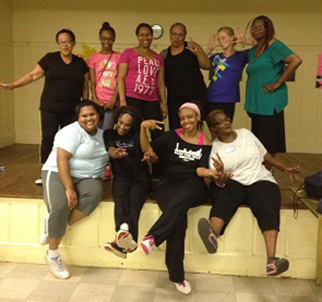 Members of The Intersection combine spiritual exercise with physical exercise.

Members of The Intersection, a new ELCA congregation in Dorchester, Mass., participate in a Bible study on Tuesday nights, followed by a 45-minute Zumba class, a Latin-inspired dance-based exercise program.

Exercise for both the body and the spirit is important, according to Tiffany Chaney, pastor and mission developer, because people are whole beings created by God.

“Physical fitness helps us to recognize the connection of our whole self,” says Tiffany, a Mobile, Ala., native who came to Dorchester in June 2012 to develop the new church community. “We’re able to understand ourselves as God’s creations and that God has, through our physical bodies, equipped us to engage in ministry in the world. As we feel more physically fit, we can be more engaged spiritually.”

In the past year, Tiffany has increased the community to about 25 Sunday worshipers. They worship in the building of the former Our Saviour Lutheran Church, an ELCA congregation that was a 90-year-old presence in the community before it closed last year. “We’re blessed to be able to do ministry in the building where Our Saviour has been,” she says.

“Zumba has been the front door to our new ministry,” Tiffany explains.

Tiffany worked in health care before switching careers and going to seminary. She was well aware of what was involved in starting a congregation in mission, having served on the Commission for Planting Congregations as a layperson in the ELCA Southeastern Synod. “I felt called to do this type of ministry.”

When Tiffany first came to Dorchester, she began meeting and praying with local business people and neighbors in hopes of getting to know the community’s needs.

Since many people couldn’t afford a gym membership, or didn’t participate in any organized exercise, Tiffany decided to start the Zumba class. Free to participants, The Intersection pays $40 a week to the Zumba instructor, but it’s money well-spent, Tiffany says, because it has drawn people to church. Some participants come for Zumba, some for Bible study, but either way, Tiffany is fine with it.

“That’s where the name The Intersection came from — where faith and life connect,” she says. “For ministry to be relevant today, people want to know how God speaks to us today. We engage the Scripture to people’s lives today.”

To better foster the healthy theme, The Intersection’s Bible study for January 2013 centered on “Healthy Body, Healthy Spirit.” The four-week class studied Psalm 139, which sees the psalmist proclaiming that he/she is “wondrously made.” “We worked on understanding ourselves as God’s creation,” says Tiffany. “We talked about being known by God in our whole selves.”

The group also discussed spiritual practices associated with healthy living and what it meant to be creative and grateful. Tiffany asked a nurse to come to a session to discuss diabetes, food cravings, the disease process and other health issues.

So far, the ministry draws about 15 to 20 adults, mostly women, and some preteen girls and younger children each week. The group is about two-thirds African American and one-third Latino, which, Tiffany says, is fairly reflective of the community. The church has added a Spanish language translation to the worship services and hopes to add more multicultural music.

“The Intersection, like other new starts happening across the country, strives to reach out to the community and show God’s love and grace to folks around us,” she says. “We strive to do that in a way that people feel welcomed.”