Everyone who thirsts, come to the waters; and you that have no money, come, buy and eat! Come, buy wine and milk without money and without price (Isaiah 55:1).

We intentionally chose the winter months,” explained James Slater. “That’s when the need is the greatest.”

Slater is pastor of St. Luke (Valatie) and Emanuel (Stuyvesant Falls) Lutheran churches in upstate New York. For eight years the linked congregations have offered a free dinner on Tuesday evenings in January, February and March. At it you’ll find good food and drink, as well as gratitude and grace before everyone digs in. A typical dinner might include choices of soup along with crusty breads, a salad bar and a bounty of desserts. And just like the verses from Isaiah, guests eat without money or price. 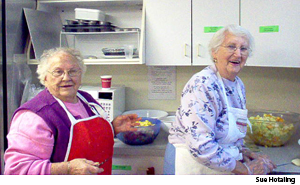 It took awhile for the idea to take hold, and Slater admits there were more workers than guests for the first dinner. But the outreach committee got busy and began advertising. Fliers in English and Spanish were posted all over town. Since then “we’ve had to open up the Sunday school rooms,” Slater said. Recent years have seen growth from 60, then 100, and finally leveling out at about 150 diners each week.

As word spread and community groups learned of the dinners, more eager hands reached out to help — the Boy Scouts, the Roman Catholic and Reformed churches, the hospital auxiliary and the rescue squad. Local merchants donate food and paper products. Groups begin signing up just before Christmas to sponsor (and cook) dinners and the three-month roster fills quickly.

A table is set aside for food overflow, and guests are provided bags and encouraged to take leftovers home.

The hospitality doesn’t include an expectation to join the church. “Our intention is to welcome everyone into the community of God,” Slater said. “Our way to do that is to provide a hot meal in a cold month.”

Every meal begins with quiet and a prayer. “Saying grace is deliberate,” Slater said, “to show that this meal is an inspired event.”

Amid clanking silverware, hot coffee and chatter there’s an air of peace and good will. Each host group plans the menu, which is always a surprise for those coming through the door. “Oh boy, chili!” some will say. Or, “They have my favorite soup tonight.”

When the dinners first began, St. Luke member Judy Polkow and her husband, David Higgs, set up their instruments and sound equipment in a corner of the hall. After his death, she continued to provide “Musical Memories” dinner music, including Christmas music in January and romantic music for Valentine’s Day.

One regular named Jason always joins her when she announces that it’s time to sing “God Bless America.” “He’s a real spark plug,” Polkow said. Others are moved to sing along, too, and some even dance. If Polkow knows it’s your birthday, you’ll be honored.

Slater said those who attend fall into one of three categories: the truly needy, elderly who rely on the dinners for fellowship, and “the church cooks” — those who love to cook and want to see what it’s all about.

Even though the dinners are free, loyal kitchen worker Alan Dellehunt calls them one of the church’s “biggest fundraisers.” It’s not unusual for grateful elderly guests to slip some money into Slater’s pocket or hand.

The strength of these meals is that the verses from Isaiah are played out all winter long. Nothing is asked of those in attendance. The meals began as a gift to the community with a simple message: come and be fed.

Asked how the dinners impact his faith, Slater (jhsiii@fairpoint.net) said, “As I look out at all the people enjoying this meal I think to myself, this is it, this is what ministry is all about.”


Sundwall is a freelance and mystery writer in Valatie, N.Y.