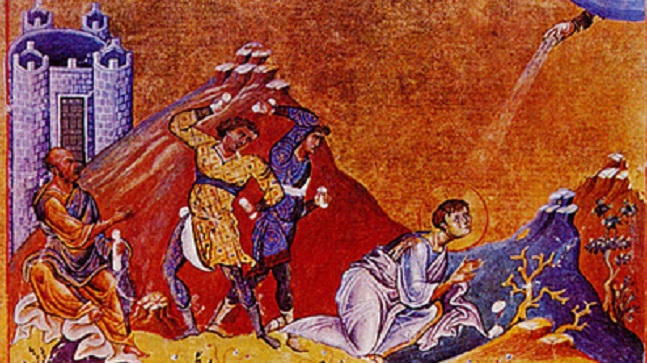 Not only that, but on Dec. 28, we’ll remember the slaughter of the boys of Bethlehem as Herod tried to ward off any challenge to his power. In this season of Christmas cheer, what is going on here?

Maybe it’s time to go back to read those Christmas texts. The threat is never far away. After all, we see Mary and Jesus as parents who can’t find a decent place to stay as they bring their baby into the world, and then they must flee the terror that Herod is about to inflict. They’re refugees, in almost constant peril in the story — that’s if we read beyond the angels and the worshiping shepherds and questing wise men.

And it’s not just at Christmas. If we pay attention to the lectionary readings, we will see that the issue of peril and death is never far removed from the subject matter. Time and time again, Christ is quite clear about what may be required from us: our very lives. And we’d like to think that we might make this ultimate sacrifice for some amazing purpose: rescuing the oppressed from an evil dictatorship or saving orphans. But we may lose our life in the midst of some petty squabble; in some versions of St. Stephen’s life, he is killed because of petty jealousy over his appointment as deacon, which triggers the conspiring that ultimately ends in his martyrdom.

Many of us live in a world where we are not likely to die a physical death for our religious beliefs. What does the life of this martyr have to say to us?

We are not likely to face death by stoning, but we may face other kinds of death. If we live the life that Christ commands, we may have uncomfortable decisions to make at work or in our families. We will have to live a life that’s unlike the lives we see depicted in popular culture. That’s not always easy, but in the end, we can hope the resistance to the most pernicious forms of popular culture will have been worth it.

And history reminds us that events can unfold rather quickly, and we might find ourselves living under an empire that demands us to live a life different than the one Christ calls us to live. We may face the ultimate penalty. Could we face death? Could we pray for the empire that kills us? As Christians, we’re commanded to pray for our enemies, to not let hatred transform us into our enemies.

Let us take some time away from our holiday festivities to remember those who have died for their faith. Let us take some time to remember the refugees who must flee the force of tyrants. Let us offer prayers for those who are still persecuted. Let us light a candle as we remember God’s promise that the kingdom breaks through in the presence of the baby in the manger, a kingdom where families will not lose their babies to the terror of tyrants, where young adults like Stephen will not be stoned for their beliefs.

What are the 12 days of Christmas?