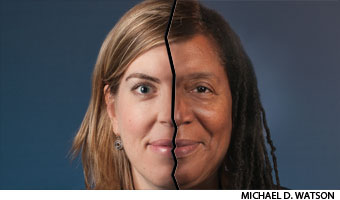 ELCA pastors are getting younger. It’s not that our beloved, gray-haired pastors are suddenly dropping 20 years (and 50 pounds) and having play-lists of the latest rock stars banging in their ears as they write sermons. The reason is that a large number of pastors are reaching retirement age this year and in the years ahead. As these leaders depart from active ministry, the face of the ELCA pastorate will change and become younger, both in age and outlook.

The numbers are clear. The ELCA ministerium is not wholly older, but a significant percentage is more likely to carry AARP membership cards in their wallets than credit cards from the Gap.

In the Northeastern Iowa Synod, for example, 60 of the 138 pastors under call to a congregation are age 60 or older, said Bishop Steven L. Ullestad. In the Northwestern Minnesota Synod, Bishop Lawrence R. Wohlrabe said that more than half of the rostered leaders (pastors and associates in ministry) were 65 or older. 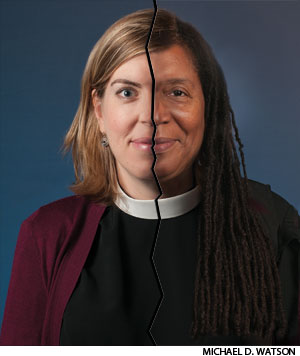 ELCA Secretary Wm Chris Boerger, former bishop of the Northwest Washington Synod, recalls that the numbers there were similar, with more than half the active pastors over 55. In the Southeastern Synod, Michelle Angalet, an associate in ministry who is assistant to Bishop H. Julian Gordy, estimates that about half its pastors are nearing retirement age.

About 13,000 of the ELCA’s almost 17,000 pastors serve in congregations. (The rest are already retired or in non-parish ministries.) Currently about 350 to 400 parish pastors retire every year.

The retirements had slowed a bit in the last five or six years, said Jonathan Strandjord, program director for ELCA seminaries. Sometimes this was because the downturn in the nation’s economy made pastors look hard at the condition of their retirement and investment portfolios and decide to continue in their calls.

Nancy Winder, an assistant to the bishop of the Northwest Washington Synod, didn’t keep statistics but saw pastors delay their retirement. “Anecdotally, what happened [in the economy] in 2008 and 2009 definitely changed some people’s plans for retirement,” she said.

But the improvement in the economy and the advancing age of the pastors who put off retiring mean that the bulge in retirements is likely to continue for the next eight to 10 years, Strandjord said.

“We are looking at the retirement situation in all our conferences,” said Marie C. Jerge, former bishop of the Upstate New York Synod. “We know there is going to be a lot of turnover in the next few years.”

As larger numbers of older pastors retire from active ministry, some of the skill and wisdom they gained in decades of service also departs. “I’m retiring the all-star team,” said Bishop Jeffrey S. Barrow of the Greater Milwaukee Synod, who said future retirees would include “good pastors, some of whom have served 20 to 30 years in their congregations.”

As those pastors leave the scene, some connection between congregations and synods and nearby clergy might also be lost, Winder said. “We will lose,” she added, “the collegial relationships built up over the years.” 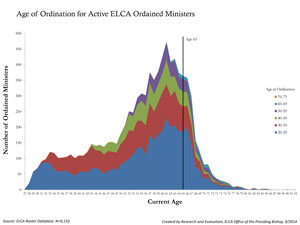 But Jerge and other bishops said many retired pastors continue to serve in some way. In Upstate New York, for example, three retired pastors who aren’t called to parishes are conference deans, overseeing colleagues in the synod’s regional districts.

The coming retirements also mean that virtually all the pastors who were ordained before the 1987 merger that formed the ELCA will no longer be serving parishes. Therefore the “residual memory” of the predecessor church bodies, which has had a significant impact on the life of the ELCA, will fade. Future pastors will have spent their entire ministry, in some cases their entire life, in the ELCA rather than having had formative or professional experiences in the American Lutheran Church, the Lutheran Church in America or the Association of Evangelical Lutheran Churches that merged nearly three decades ago.

Bishop Claire Burkat of the Southeastern Pennsylvania Synod sees a need to maintain an age balance in the synod as larger numbers of older pastors retire, something she has been considering for four years. “That kind of balance won’t happen unless you work for it,” she said.

Since the bulge in retirements over the next few years is — statistically at least — a sure thing, it might look as if the ELCA won’t have enough pastors. Some might also fear a shortage by looking at the number of people graduating from seminary. Earlier in the ELCA’s life, about 250 seminarians graduated each year, Strandjord said. Last year there were fewer than 200.

But a clergy shortage isn’t likely to happen, say ELCA planners and several bishops interviewed for this article. “I’m not hitting any panic button,” said Wohlrabe as he considers the possible retirements of about half of the Northwestern Minnesota Synod’s pastors. “There are still going to be people out there to do the work.”

It appears that some of those are people who — according to the numbers — are or should be retired. “It seems there is a trend that people are working longer, and not just for financial reasons,” said Bishop Kirby Unti of the Northwest Washington Synod. “We are seeing sort of a rehabilitation of age, and 70 is the new 60.”

Unti said more people over the traditional retirement age find “meaning in what they do and support for them as they do it.”

Wohlrabe said, “It is the exception rather than the rule that people say ‘65 and I’m done.’ ”

In the Northeastern Iowa Synod, many people over 65 are vibrant, healthy and want to keep on going, Ullestad said. Continued active ministry also seems attractive to second-career pastors who came to ordained ministry when 40 years old or older, he added.

“I don’t see anyone working just because they need the money,” Ullestad said, stressing the commitment the pastors have to the church and their ministry.

Wohlrabe noted that “some of the old lines between ‘active’ and ‘under call’ and ‘retirement’ are being blurred.”

Fears of a pastoral shortage are also alleviated by statistical and financial facts. “We have between 2,000 and 3,000 congregations where the Sunday attendance is 50 or fewer,” said Kenneth Inskeep, executive for ELCA Research and Evaluation. The issue is whether such congregations can or should continue to support a full-time pastor.

The smaller number of pastors available for regular calls is not a critical problem, said Barrow of the Greater Milwaukee Synod. “There will be a bunch of retirements,” he said, “but I would have to temper that fact with the fact of a shrinking church.” Not all retiring pastors have to be replaced on a one-to-one basis as some congregations look for an alternative to the full-time pastor who served them for many years.

It’s anticipated that many small congregations will close or merge. If they close, a pastor is no longer needed; if they merge, move or otherwise reorganize their work, the new ministry can provide a more stable platform for future pastors. Ullestad said retirements and other vacancies in small congregations in the Northeastern Iowa Synod have brought about “many conversations, and quite often they have revitalized their mission.”

The statistically shrinking church is a reality, Barrow said, citing a Wisconsin city with 20 Lutheran churches where “20 years ago, most had multiple staff.” Today, he said, many of those churches have less than full-time ordained ministry.

Some retirees may serve those smaller congregations, but, Inskeep said, “there may be a distribution problem.” When they retire, many pastors move to popular retirement places like the Carolinas and Florida, he said, “so they will not be available in North Dakota or in some metropolitan areas.”

In the Southeastern Synod, Angalet said she is frequently contacted by active and retired pastors who seek the temperate climate of the Southeast.

The bulge in retirements is also likely to have a beneficial impact on the ability of clergy to move from one call to another and perhaps on the number of pastors available for vacant congregations to interview. It is also more likely that the older pastors will be replaced by those 20 or 30 years younger.

ELCA Secretary Boerger says this will improve the possibilities of healthy calls for seminary graduates and notes that “many of the newer people in the ELCA are younger and might appreciate a younger pastor.”

While it’s not quite a “youthquake” with thousands of Generation X pastors or millennials suddenly flooding into ELCA pulpits, soon the majority of men and women in those pulpits will be born after 1975. And although their ministry will change, it looks like many of the “old guard,” pastors born during the baby boom decades and earlier, will — because of their commitment to ministry — still be around.


Our church is changing, and the leadership of the church is changing with it. In the next decade thousands of our pastors will retire. It may present short-term difficulties in finding people to take their places, and our church may suffer from the loss of so many experienced clerics. But their retirements may open the door for younger clergy with new ideas to lead our church.