A new year. Time to start over. A fresh set of possibilities. Out with the old, in with the new. New Year’s resolutions are made — usually along the lines of self-

improvement. And so, with a combination of optimism and grim determination, we set out into the New Year.

But how long does our resolve last? Days? Weeks? It’s a good bet that the gym will be a lot less crowded at the end of January than it was at the beginning. 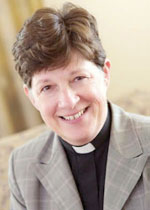 New Year’s resolutions are symptoms of our underlying disease. We sense that our lives are not entirely the way they should be. We have an obscured image of the beauty and wholeness of God’s good creation. There is a gap between who we are and who we have been created to be. So we try to fill that gap ourselves. We are going to eat right, work out, fix our relationships, floss regularly, lose weight, corral our calendars, clean the garage, learn another language, etc., etc., etc.

These are all worthy goals and might actually be beneficial, but they can’t fill the gap. Maybe we can sustain this aggressive schedule for self-improvement past January, but probably not. Discouraged and dispirited we make it to the beginning of Lent only to do the spiritual version of New Year’s resolutions. And we wonder, like Martin Luther, is it enough?

All of our efforts to achieve self-justification and self-righteousness are futile and may, in fact, be harmful. They twist and distort our relationship with God, with each other, even with creation. They become a means to an end; food, instead of something to enjoy, becomes a dietary supplement; our bodies, instead of being a gift from the Creator, become our enemies in our quest for physical perfection; other people, instead of being a loving community, become competitors. Exhausted and frustrated in our attempts to save our lives resentment sets in.

And that’s really it, isn’t it? We are trying to save our own lives, to stave off death. We cannot and we do not have to.

There it is. In baptism we have already died the only death that really matters. The death of Christ Jesus into which we are buried is the end of death. It is the breaking of the power of sin. It is the beginning of our new life. To borrow a pop culture image, we are now the undead.

The early church understood this and enacted it in its baptismal practice. Candidates for baptism were stripped and, naked as the day they were born, went into the water. When they came out they were anointed with oil and clothed in new garments. This practice will probably not be renewed in most of our congregations — the strain on the altar guild alone would prohibit it — but it made it physically and visually clear that the baptized had left their old life and entered Christ’s new life by death and resurrection.

Theologian Robert W. Jenson wrote in Christian Dogmatics: “My baptism broke the bond of the past on the future.” In baptism freedom from the past and new possibility come together. In baptism we are now in Christ. “So if anyone is in Christ there is a new creation: everything old has passed away; see, everything has become new” (2 Corinthians 5:17). It’s been done. We are justified. We have been made righteous. We have been set free.

So make New Year’s resolutions if you want, but understand that in baptism God has given us a new life, a new year, a new day. Freed from all of the emotional and spiritual energy that had been invested in the impossible task of freeing ourselves we are now free to love God and serve the neighbor.