It may look like a typical youth room with comfortable, mismatched couches and tables. But today the space at St. John’s [Episcopal] Cathedral in downtown Denver is a college classroom where Nelson Bock leads three students in a discussion about “buying local.”

At first he stays local, discussing the Mile High Business Association of Colorado. Then Bock mentions a chain of stores in Waverly, Iowa. It may be an unusual example for a class called “The Metropolis,” but the students immediately get the reference. All three are enrolled at Wartburg College in Waverly and are spending this term in Denver through Wartburg West.

Bock and his spouse, Bonita, both ELCA pastors, direct the college’s Wartburg West program, which is celebrating its 30th anniversary this year. Originally conceived by Wartburg alumni and pastors in the Denver area, the program is a way that college students, many from small towns and rural communities, can experience an urban environment through internships, living in the city and taking interdisciplinary classes. 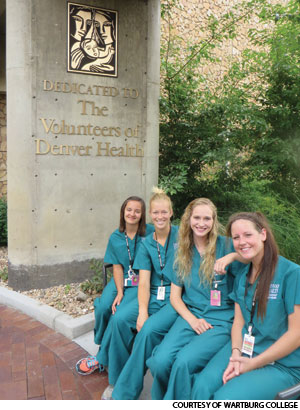 Students build community through retreats and shared meals. Many use their free time to explore the Denver area through hiking, concerts, museums and other local spots.

“The benefits are multifaceted,” said Alex Thibodo, a sophomore who interns at the Colorado Center on Law and Policy. “I’m stimulated by an urban environment with a lot of diverse perspectives. … It’s a good reality check to put what I know into practice and to learn what I still need to improve.”

For Fatima Pai, a fourth-year student from Abuja, Nigeria, “good exposure” to internships is also a plus. Working with the Denver Justice and Peace Committee and the American Friends Service Committee allows Pai to practice skills she hopes to use in Nigeria to help “give people equal opportunity and policies that accord [them] dignity.”

Bonita Bock attributes the breadth and quality of personalized internships to the relationships Wartburg West has cultivated with organizations and businesses over three decades. “People know us,” she said.

New internship sites receive glowing recommendations from such institutions as the Denver Center for the Performing Arts, which has employed Wartburg West interns for years. Still, Bonita Bock said much of the credit goes to the students: “Supervisors tell us, ‘Students who come to this program are well-prepared.’ ”

Krista Kilgus participated in Wartburg West in the early 2000s and now directs the Denver-based Urban Servant Corps, a residential service-learning program for young adults. Kilgus and other local Wartburg West alumni host cultural outings for students and act as mentors. “It gives us the opportunity to know students and help them settle into Denver,” she said.

One of Kilgus’ mentors was Scott Glaser, who also settled in Denver after his Wartburg West term in 1993. His internship at the U.S. Department of Commerce helped him “see how nonprofits work in a metro center.” But it was “seeing visible poverty” on Denver’s streets that led him to his current vocation as executive director of NAMI (National Alliance on Mental Illness) Colorado.

As Wartburg West has grown and expanded, welcoming students from Wartburg and Augustana College, Rock Island, Ill., it also has found a permanent location on St. John’s campus. The partnership began when the cathedral hosted a community conversation to discuss ways to make better use of its downtown property. Nelson Bock had a possible solution: Wartburg West was looking for more space.

Retired St. John’s clergy associate Sally Brown saw it as a “serendipitous” way to put formal ecumenical partnerships into practice. “ ‘Called to Common Mission’ (an agreement establishing full communion between the Episcopal Church and ELCA) sounds lovely, but where do you embody it?” she asked.

The partnership between the Episcopal cathedral and Lutheran college seemed to answer that question — and the result “has gone deeper and further more quickly than we thought,” Brown said.

For Nelson Bock, it’s a relief and joy to have a physical home for Wartburg West: “The name has applied to a program; now we can say it’s a center, a campus.”

The cathedral also has gained from the relationship. Jadon Hartsuff, who serves as the cathedral’s clergy liaison to Wartburg West, recalls a conversation last year with students from Bonita Bock’s leadership class. They had interviewed neighbors living around the borders of a park owned — and usually locked — by St. John’s: “The students came and said, ‘How can we help … so that the park can be open more?’ ”

Today, Hartsuff reported proudly, “the park is open pretty much all the time, not just for the cathedral but for the community.” It’s an example, he added, of “organic, on-the-ground possibilities from having gifted college students in our midst.”

Brown concurs: “We were ready and yearning for that kind of connection.”

The staff, students and alumni of Wartburg West have high hopes for the future. Bonita Bock hopes the program “can be the initiator to provide stronger connections to other ELCA colleges without a program here but with a historic connection.”

Nelson Bock envisions a “leadership institute” to introduce Colorado high school students to the benefits of Lutheran higher education. Wartburg College has already hired an admissions counselor based at Wartburg West, Mackenzie Compton, who is — no surprise — another proud alumna of the program.

For now, students will keep exploring “The Metropolis” at St. John’s and putting their experience into practice in the metropolis of Denver: like Kellie Solberg, who secured free tickets from her internship site, the Denver Botanic Gardens, for homeless women served by Capitol Hill United Ministries, where her classmate Ellie Oberheu interns.

In the many classrooms of Wartburg West — cathedral, internship and neighborhood — students learn the lessons of a lifetime.