Sanctuary of Marshfield, Mass., likes to think outside the church.

From the style of its building, which resembles an A-frame ski lodge in the woods, to an altar made of old pallets and rocks, much about Sanctuary is out-of-the-box thinking. Its signs outside are simple chalkboards, with the message of “Create. Connect. Respond.”

Sanctuary, a 4-year-old congregation, has a new way of doing church. Even its 10:10 a.m. and 4:04 p.m. worship times are offbeat but appealing to a new crowd of churchgoers. 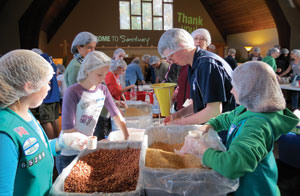 Worship doesn’t necessarily follow the lectionary but takes an educational approach, said its pastor, Mark Huber, who will often explain one parable over multiple weeks. “Our one constant is change, so we’re always trying to look for a new way to connect and be creative,” he said.

A blended congregation of the ELCA and the United Methodist Church, Sanctuary is aimed at people who are unplugged from church.

“A majority of our members haven’t been active in a church as adults,” said Huber, and many were raised Roman Catholic.

The congregation’s website (www.sanctuarymarshfield.org) feels vibrant, hip and welcoming with these headlines: Children aren’t just welcome, they’re embraced. Come as you are, even in T-shirts and jeans. We read from the Bible. People will probably say, “Hi.” We have communion every Sunday …. There are a variety of ways to worship God and all of them are amazing. 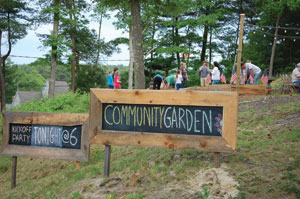 Simple chalkboards advertise special events, such as working in Sanctuary’s community garden that produces food for the local food pantry.

Huber, whose wife, Sarah, is an associate in ministry and Sanctuary’s creative director, said the church’s style is about seeing God at work in the world in new ways. Music is uplifting and fun, he said, and often includes bands.

A church being made new

“God has always been faithful to the church and the church is always being made new. We strive to be faithful to a God who is calling us to do this. We help people see how the gospel is playing out in their lives,” Huber said.

Members plant a community garden on the church grounds to stock a food pantry and often gather around the grill for a meal. The church also runs a popular preschool for about 120 children, which was started by the Methodist church.

As a first-call pastor, Huber spent time getting to know the community when he arrived in Marshfield to start a mission church, holding worship on the deck of a house. He met the pastor of the Methodist church, which had a building and a preschool but was about to close because of dwindling membership. The two churches partnered and Sanctuary was founded with a dozen core members. 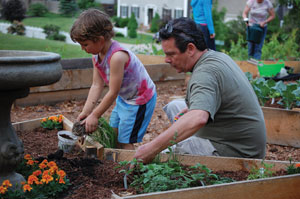 “We now have 100 each week,” he said. Approximately 160 turned out last Easter. “We never see the same crowd every week,” which is often comprised of young families with children, he said.

Sanctuary’s community outreach ministry, in addition to the preschool, includes making space for social service groups, such as 14 Alcoholic Anonymous meetings and several scouting groups. It also runs a summer day camp and is planning a second mission trip to Guatemala.

Former Roman Catholic Richard Noyes said he was drawn to Sanctuary in 2013 because of its community involvement. “The first thing I remember was the ‘meal packaging’ sign,” he said, referring to the large chalkboard signs inviting folks to help package meals for the hungry. 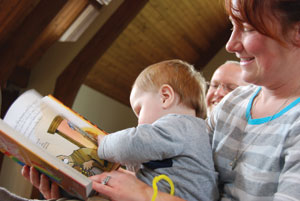 Worship at Sanctuary is education-based, and children — such as Larson Smith being held by Amy Smith — are “embraced,” according to the congregation’s website.

Noyes was also drawn to grill nights on the church’s front lawn, which invited people to “come eat, sing and meet great people.” The events stuck in his head, and the following spring he attended with his family.

In addition to young families, Huber said the church attracts empty nesters looking for community and a new church experience. Huber said he sends those looking for a more formal church to two traditional ELCA congregations about 20 minutes away.

“We like to be honest about who we are and who God has called us to be,” he said.

The congregation is a collaboration of the two denominations and is shaping its identity as it grows, he added.

“We’re a little bit of everything and are diverse, but at the very center is the Reformation and our Lutheran and Methodist heritage,” Huber said. “We preach grace.
We strive to love God and love
others.”