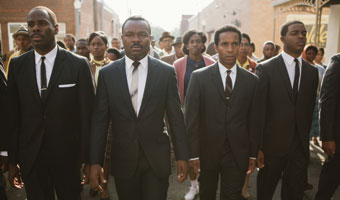 This is a stirring movie about civil rights leader Martin Luther King Jr. and his crusade for equality. In 1964 the South is still in the grip of racial hatred. Four African-American girls are killed in a church bombing in Birmingham, Ala. Black citizens, like hospice nurse Annie Lee Cooper, are repeatedly intimidated and turned away in their attempts to register to vote. King and his associates in the Southern Christian Leadership Conference decide to stage a large-scale demonstration in Selma, Ala. Their goal is to convince President Lyndon Johnson to get behind voting rights legislation.

The best thing about Selma is its convincing portrayal of how nonviolent action can effect social change. It’s an inspiring moment when the Selma community is joined by priests, nuns, ministers and rabbis on the march (photo above) to Montgomery, Ala., united in a pursuit of freedom, equality and justice. Here we see the important roles of prayer, Scripture, hymns and community solidarity. In these times, when violence seems to be the response to perceived enemies and to settle grievances, we look back at the civil rights movement with the utmost respect and admiration (Paramount Pictures, PG-13 — disturbing thematic material including violence, a suggestive moment, brief strong language).

From the margins to the center