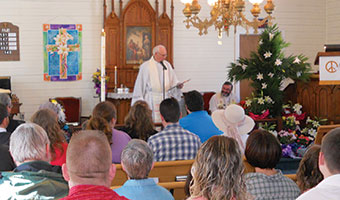 Yellow Lake Lutheran Church, Danbury, Wis., went from a dozen people in the pews more than 15 years ago to a packed parking lot and pews in recent years. Members used their creativity to employ retired pastors with cabins in surrounding lake country to lead them.

Yellow Lake Lutheran Church sits among the oaks and pines on County Road U, halfway between Webster and Danbury in northwest Wisconsin. Some 15 years ago, Yellow Lake would have been lucky to have 15 worshipers in its pews.

For many years, the little congregation had received the services of whoever was the young pastor at the ELCA church in nearby Falun. Throughout the 1990s, membership kept falling until it got to the point where they had to give up even their part-time minister. At the end of their rope, five council members went to the synod bishop about their seemingly hopeless predicament.

Robert Berg, then bishop of the Northwest Synod of Wisconsin, didn’t like the idea of losing the old church and suggested a possible solution. He knew of two pastors who had retired to their lake homes within 20 minutes of the church and suggested the council ask if they might take this on. Within a week those pastors, Clint Erickson and Ray Reinholtzen, had been contacted. They liked the idea and began sharing preaching, teaching and visitation duties at Yellow Lake.

Word got out that there was some good preaching and a welcoming atmosphere at the little church, where there had been no choir, Sunday school or organ for years. But a young woman played piano, and the church started to grow. While leaving worship, one summer visitor was overheard saying: “Now that’s what I call pure church.”

Over the next few years things got busier for the pastors, so the council found another retiree, Roger Kampstra, to come on board. He brought with him a love of congregational singing and members responded.

Eventually trees had to be cut to make a larger parking lot for 30 to 40 cars, and the pews were packed every Sunday. A well-attended Bible study, along with an active group of women, made the old church young for its age.

Erickson re-retired, but the congregation found yet another retired pastor, Doug Olson, living in nearby Spooner. He’s out shaking hands, and the old bell isn’t rung until he’s shared the joys and sorrows of the congregation.

Reinholtzen re-retired as well, but the congregation went looking for another pastor who might want to contribute.

Olson said during the announcements, “I believe we must be the smallest congregation with three veteran ministers on staff.” Eighty-four parishioners laughed. They do that a lot at Yellow Lake.

Editor’s note: Since Wilson wrote this piece, Kampstra has re-retired, but Myron Carlson and Danny Wheeler have joined the pastoral staff. Doug Olson, who calls himself “the coordinator of the bunch” (three pastors) reports, “We’re starting to run out of room.”

With about 175 members, Yellow Lake (www.yellowlakelutheranchurch.org) now has a Sunday school and confirmation program, and it paid for kids to go to summer camp. The congregation works with neighboring churches to feed the hungry and supports ELCA ministries such as the Malaria Campaign.

“We’re a happy group of pastors who are spontaneous and who believe if you’re not having fun at church while working hard, there’s something wrong,” said Olson, adding that in retirement he’s just giving back to the church what he received throughout his life.


Wilson, author of the 1974 church musical "He Lived The Good Life," is now living in Minneapolis but retains his membership at Yellow Lake Lutheran Church, Danbury, Wis.