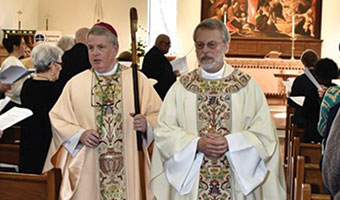 Earlier this year on the Feast of St. Brigid of Ireland, Scott Benhase (left) and H. Julian Gordy, bishops of the Episcopal Diocese of Georgia and the ELCA Southeastern Synod, respectively, consecrated the new building shared by St. Patrick’s Episcopal and the Lutheran Church of Our Saviour in Albany, Ga., a sign of growing ecumenical relations since “Called to Common Mission” was passed 15 and 16 years ago by the two church bodies.

Full fellowship between Lutherans in the ELCA and Episcopalians was declared in 1999 and has resulted in many cooperative ministries and the sharing of pastors. In the last few years, that cooperation in the Southeastern Synod has blossomed like magnolias in May. 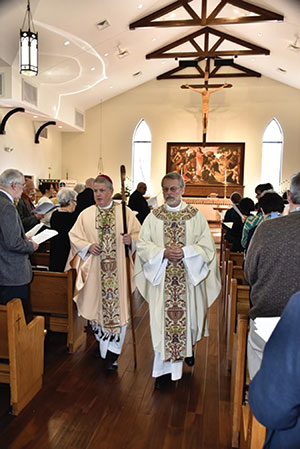 BOB PARKER
Earlier this year on the Feast of St. Brigid of Ireland, Scott Benhase (left) and H. Julian Gordy, bishops of the Episcopal Diocese of Georgia and the ELCA Southeastern Synod, respectively, consecrated the new building shared by St. Patrick’s Episcopal and the Lutheran Church of Our Saviour in Albany, Ga., a sign of growing ecumenical relations since “Called to Common Mission” was passed 15 and 16 years ago by the two church bodies.

It’s a relationship that reaches back many years, even before the formal agreement, said H. Julian Gordy, synod bishop. “The biggest obstacle at the beginning was our different polity,” he said, referring to the decision-making processes of both churches.

But the ecumenical commitment in the synod is strong, said Randy Jones, pastor of Messiah Lutheran Church, Montgomery, Ala., and the synod’s ecumenical officer. Seven synod pastors are serving in congregations of ELCA ecumenical partners, he said, and nine pastors from those denominations lead ELCA congregations.

In a region where Episcopalians outnumber them, Gordy said he has found that Lutherans are ready to cooperate. At times there was hesitancy, he said, but “we work closely with congregations to prepare them for these kind of ministries.”

One of the most unusual partnerships took another step forward last February when St. Patrick’s Episcopal and Lutheran Church of Our Saviour in Albany, Ga., dedicated a sanctuary for both parishes.

The new building has both a Lutheran and Episcopalian cornerstone. A smaller room in the building is named the “Our Saviour Chapel” for the Lutheran congregation. And an outside altar was built in honor of Bill Diamond, the ELCA pastor who until his death was key in forming the alliance between the two parishes and had been designated “Lutheran-pastor-in-residence” for the congregations.

But it’s more than just sharing a new building, said Joy Davis, an Episcopal deacon at St. Patrick’s. Jay Weldon, St. Patrick’s rector, leads a Lutheran service at 9 a.m. and an Episcopalian one at 10:45 a.m. People are encouraged to attend whichever service is convenient for them, and there is much crossover, Davis said.

Davis also said that she and Weldon can now provide pastoral care to people in both congregations.

As someone who was on his denomination’s ecumenical commission for 12 years, Harry Shipps, retired bishop of the Episcopal Diocese of Georgia, was thrilled to see the cooperation. “We always encouraged these things,” he said, “but formerly we didn’t have the opportunities for cooperation that we have now.”

Still, Shipps worries that not enough people know about the ecumenical opportunities.

The partnerships stem from “Called to Common Mission,” a declaration of fellowship adopted by the ELCA in 1999 and approved by the Episcopal Church a year later. The agreement was reached after more than 20 years of dialogue and cites wide-ranging agreement between Lutherans and Episcopalians on church doctrine and practice. With CCM, as with other ELCA fellowship agreements, clergy of the two denominations are allowed to serve congregations of either church body.

Gordy said the agreement, with new blossoms growing recently in Georgia, also reaches other parts of the synod, which includes Alabama, Mississippi and Tennessee.

Lutheran Episcopal campus ministry at the University of Tennessee in Knoxville, which is an actual congregation called Tyson House, has produced young people now considering seminary and the ordained ministry. “Some were not even Lutherans or Episcopalians before,” Gordy said, adding that now they have to decide which church’s seminary track they will follow.