Aug. 29, 2005, Hurricane Katrina slammed into the Gulf Coast, wreaking havoc from the Florida Panhandle to western Louisiana and killing 1,833 people. Approximately 90,000-square miles were declared federal disaster areas and 1 million homes and buildings were damaged or destroyed, making it the most destructive and costliest disaster in U.S. history.

ELCA members took action by offering their time and skills to volunteer in the area and by giving more than $27 million to Lutheran Disaster Response (LDR) to support recovery. LDR staff immediately began coordinating with its network of social ministry organizations around the country to support the efforts. Working with affiliates, it also provided disaster case management services to approximately 11,000 households from 2005 to 2008 with the support of $8 million from Katrina Aid Today.

A component of the ELCA’s response was the emotional and spiritual care offered to those affected by Katrina. Congregations and pastoral care services provided a ministry of presence and to demonstrate Christ’s compassion.

“One of the greatest achievements of Katrina response for the Lutheran community was the outpouring of volunteers, and the steadfast ministry provided by Lutheran congregations and pastors in the areas affected by Hurricane Katrina,” said Kevin Massey, LDR associate director from 2005 to 2006.

Congregations in the affected areas set up hosting centers and provided hospitality to thousands of volunteers over the years following Hurricane Katrina. Christus Victor Lutheran Church in Ocean Springs, Miss., alone housed 50,000 volunteers from all 50 states and 20 countries at its Camp Victor.

“What a Relief!” was a volunteer program started by LDR as a 2006 alternative spring break program. It expanded to coordinate 50,000 volunteers during the four years following Hurricane Katrina.

“We helped volunteers understand the realities of long-term response and the vital role they were playing,” said Mike Nevergall, LDR program associate from 2005 to 2007. “It’s neat to think back on how many young adults had a faith formational experience as a part of those trips.”

Thank God for the Lutherans

Emma Giron’s house in St. Bernard Parish, 5 miles east of New Orleans, was one of the million homes damaged by the hurricane. She and her sons managed to evacuate before the storm hit, but they knew from watching news reports from a Houston hotel room that their home was right in Katrina’s path.

“We went back to look at the house and it was full of mud up to our knees. We would later find out that there were snakes living in that mud,” Giron said. “I had no idea what to do. That’s when the Lutherans called me.” 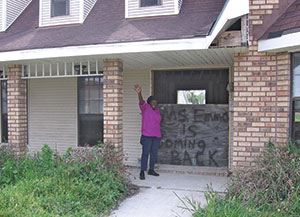 That was about a year after Hurricane Katrina. Giron, who had been living in Texas since the disaster, received a call from an LDR coordinator who asked if the organization could help fix her house. Ecstatic, Giron moved back to St. Bernard Parish and lived with a friend so she could be near her house while it was getting repaired.

“Every week there was a new crew of people working on my house,” Giron said. “They were the most humble people, and they were always ready to pray with me.”

About a year or so after work began, Giron’s house was finished. “The Lutherans came through for me. They didn’t leave me until everything was done,” she said. “God was working through those people. Thank you, God, for the Lutherans.”

The Lutheran volunteers were affected too. “An overwhelming majority of people I talk to who want to know about volunteering in a disaster area share [that] their first response was in the Gulf with Katrina,” said Michael Stadie, LDR program director.

After the initial recovery work the ELCA maintained a presence in Katrina-affected areas. The 2009 and 2012 ELCA Youth Gatherings, held in New Orleans, continued the work and relationship-building started by LDR.

“ELCA youth built a relationship with the people of New Orleans post-Katrina that continues to this day,” said Heidi Hagstrom, program director for the Gathering.

While their tangible service was deeply valued, she said what was more powerful was that “they intentionally listened to the stories of people still traumatized by Hurricane Katrina, bearing another’s burden, thus ‘fulfilling the law of Christ.’”