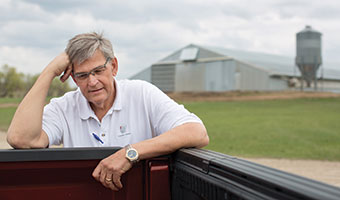 Turkey farmer Greg Langmo, a member of Zion Lutheran Church, Litchfield, Minn., lost 11,000 turkeys to the avian influenza and is uncertain if his business can survive the loss. “I’m concerned about the multiple layers of our community and synod that are affected by the flu virus: corn growers, feed mill operators, truckers, people in the processing plants and the businesses that are interconnected,” said Jon Anderson, synod bishop. “The flu is a huge disruption to a big system. The turkey and chicken growers feel like they’re not in control of their lives or businesses until they get a green light from the government to move forward.

In the aftermath of a flood or tornado, it’s easy to see the devastation. But the recent avian influenza outbreak has hit hard, undermining small-town economies while leaving no visible trace.

More than 47 million chickens, turkeys and other birds have been culled nationwide to control the spread of the bird flu. More than 200 cases were reported in 16 states between December 2014 and June of this year.

Hundreds of the economies affected are in ELCA synods populated by rural and small town churches. In Minnesota, the virus has been detected in 23 counties, heavily impacting a four-county area in the heart of the Southwestern Minnesota Synod.

“I’m concerned about the multiple layers of our community and synod that are affected by the flu virus: corn growers, feed mill operators, truckers, people in the processing plants and the businesses that are interconnected,” said Jon Anderson, synod bishop. “The flu is a huge disruption to a big system. The turkey and chicken growers feel like they’re not in control of their lives or businesses until they get a green light from the government to move forward.

“There’s great anxiety. Many people don’t appreciate that farmers care about their animals. Most don’t understand the financial and other risks involved with bringing food to their table. Fewer and fewer people have any personal connection to farm life anymore.”

After visiting farmers and congregations in early summer, he lamented, “How will this affect the congregations financially? This situation is a great challenge and opportunity for God’s church.”

Langmo explained that growers have a strong emotional connection with their flocks. The turkeys he lost were fun to be with, were cheerful and liked to be around people. “They followed you around like puppies,” he said. “They wanted to see what you were doing. To see them sick, you can imagine the helpless feeling. It’s overwhelming.”

His operation was first hit in April, which destroyed 11,000 turkeys and almost completely shut down his operation. Normally he would have nine to 10 flocks, but in mid-June he had only one 2-week-old flock.

If the emotional impact of losing cherished birds isn’t enough to set a farmer back, the economic repercussion brings the problem home in a real way. Profit margins are razor thin under normal conditions. Losing flocks is financially devastating.

Poultry production and processing is a $3 billion industry in Minnesota, the nation’s largest turkey producer. As of mid-May, economic loss due to avian flu was estimated at $310 million of turkey and egg production.

Langmo said the disease “has laid waste to the Upper Midwest poultry industry,” including turkeys and egg-laying hens. In his area 70 miles west of Minneapolis, “virtually every flock in every farm has been affected somehow” he said, estimating that it affects 100 farm sites.

Broilers, or chickens raised for meat, have not been affected, possibly because of their relatively short 45-day growing cycle.

The staggering loss of birds has created a ripple effect that cuts into the heart of small-town economies, touching nearly everyone. Erik Rundquist, pastor of Svea (Minn.) Lutheran said 90 percent of the congregation is directly or indirectly impacted. Svea is in Kandiyohi County, the state’s largest turkey producer. Local production losses were about $8 million as of mid-June, he said.

It’s estimated that for every dollar of direct impact to bird production, another 80 cents is lost in the economic ripple effect. “Turkeys and chickens eat a lot of corn,” Langmo said.

Corn prices in the Upper Midwest are dropping, affecting local farmers. Feed mills are feeling the pinch as sales are down significantly. Truckers, who deliver feed and transport birds, are down to 20 hours per week of work and are looking for economic alternatives. Nearly 10 percent of the projected economic loss will be in the trucking industry. Hundreds of processing plant employees are working fewer hours. Some are now working second jobs, leaving less time to care for children and aging parents.

“Most people can’t get by very long without a regular paycheck,” Langmo said.

Equipment dealers sell less equipment. Growers getting back into business may delay equipment purchases for up to a year. Empty barns don’t use electricity, straining the local electric co-op. Schools, hospitals and churches struggle to maintain normal operations.

As far east as Pennsylvania, supermarket egg prices have increased 60 to 80 percent, with eggs selling for $3.70 per dozen in some areas. Eggs are essential for baked goods and pizza dough, so costs are rising significantly for bakeries and restaurants.

Poultry shows at many county and state fairs are suspended for 2015, including the Minnesota, Kansas, Ohio and New York state fairs.

The disease comes full circle when growers are ready to restart production. Langmo said,“There’s a dramatic shortage of poults,” the growers’ term for hatchlings.

As a result, farmers like Langmo spend a lot of time thinking about the future.

“Our equity is eroding every day. We’re not allowed to vaccinate. We have no insurance, public or private. Given the low margins …,” his voice trailed off.

He said growers nearing retirement age, like him, are seriously thinking of selling out to preserve the equity. “You wonder if you’re making the right decision to go back in,” he added.

Langmo’s advice to other growers who haven’t been directly affected is: “Sit in a front pew and just pray.”

Government agencies studying the avian flu aren’t completely sure how it spreads, complicating containment strategies. It’s impossible to tell when or where the disease might strike next. The flu is almost always fatal to domestic birds, but doesn’t affect humans and is not a threat to the food supply.

If a bird tests positive, all flocks in the barn are euthanized. Barns are then cleaned at the owner’s expense, a process that takes about two months to complete.

The current theory is that avian flu is spread by migrating wild birds through their droppings and through the air. Wild birds have better resistance and can carry the virus without being affected. Containment practices include washing vehicle tires when
entering and leaving an area with domestic birds. People coming on- and off-premises have their shoes or boots washed also. It’s possible that small rodents can bring the virus into barns.

The virus appears be moving east from the Pacific Northwest, but its impact has been strongest in the Upper Midwest, with Southwest Minnesota and Northwest Iowa being hit hardest. In Iowa more than 32 million turkeys and egg-laying hens have been euthanized. In Minnesota more than 9 million birds have been affected in more than 100 cases.

The governors of Minnesota and Iowa have declared states of emergency. More than 2,400 government employees and contractors have assisted in the disaster response in Iowa alone.