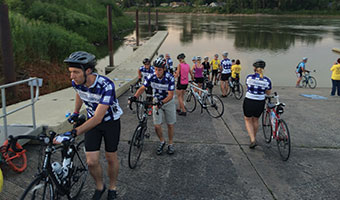 After the traditional dipping of tires in the Missouri River, members of the Lutheran Men in Mission bike team start their ride to the Mississippi River during RAGBRAI, the oldest, largest and longest bike tour.

Over seven days and seven nights in July,10 Lutheran Men in Mission (LMM) members, along with four spouses, stimulated some 700 conversations about church and faith while riding in the 43rd (Des Moines) Register’s Annual Great Bicycle Ride Across Iowa: RAGBRAI.

RAGBRAI is the oldest, largest and longest bike-touring event in the world, with an estimated 30,000 riders who come from all over the earth to endure 460 miles of heat, humidity and hills through 67 towns, averaging about 67 miles per day. Thousands of support personnel accompany the ride and provide hospitality in the host cities. Five people in two RVs supported Team LMM. 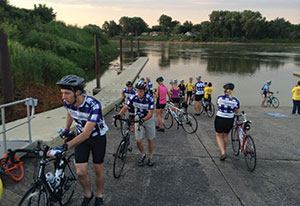 Kyle Pedersen
After the traditional dipping of tires in the Missouri River, members of the Lutheran Men in Mission bike team start their ride to the Mississippi River during RAGBRAI, the oldest, largest and longest bike tour.

LMM is a national ELCA ministry that invites men to become “bold, daring followers of Jesus Christ.” Its team participated in RAGBRAI to be an example, presence and witness to the gospel throughout the ride. Team members also solicited pledges to help raise money for LMM ministries.

Eight riders made the entire trip across Iowa sporting Team LMM bike jerseys. Others tagged along for a day or two, so the group’s size varied with 14 total riders.

The ride began July 19 in Sioux City on Iowa’s western border. After the traditional dipping of bike tires in the Missouri River, the group was on the road by 6 a.m. heading east to the Mississippi River.

Kyle Pedersen of Lutheran Church of Hope in Des Moines said the LMM jerseys sparked conversations across the state, with each team member averaging about 12 conversations per day. “There were a lot of contacts about equipping congregations with a men’s ministry,” he said.

Other conversations were with Lutherans considering similar team rides in their states. And at least one conversation started with, “Hey, you Lutherans are everywhere.” One rider who was part of a 150-member Air Force team rode 100 miles with the LMM group and said, “Guys like you are the real warriors on the front line. Fighting for the hearts of men takes a lot of courage.”

Then there was a conversation at Church of the Damascus Road, an ELCA prison congregation at the Fort Dodge (Iowa) Correctional Facility. The men of Damascus Road made an early pledge to the team of 10 cents per mile. LMM members in the Western Iowa Synod are longtime Damascus Road supporters, including involvement in a mentoring program for newly released prisoners.

Mark Juhl of St. Paul Lutheran Church in Remsen, Iowa, said, “Frankly, there was a little pride in wearing the jersey. But there was some self-reflection that came from being identified as a Christian and a Lutheran. There was a feeling that others might be watching you and judging Christians and Lutherans in particular by your actions.”

The ride ended in Davenport, Iowa, with the dipping of bike tires in the Mississippi River.

Juhl expects the best part of the ride is yet to come: “I see it as an opportunity to relate better to the younger people in our congregation, synod and community. Bicycling is an interest of our kids, youth and many young adults. It’s an opportunity for me to share my faith story and how the Lord has blessed me.”