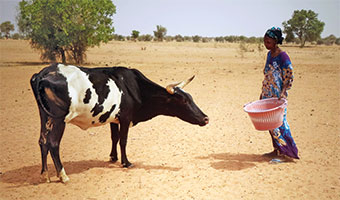 ELCA World Hunger works in partnership with Fedannde Jolof, an animal husbandry center in Senegal, to crossbreed cows that produce 2.6 gallons of milk per day. The “better” cows help families on their way to food security.

Ever think about the reach of your ELCA offerings? Ever wonder if a small contribution to a place far away can really make a difference?

For some time now in the Linguère area of Senegal, a partnership between dairy herders and the Lutheran Church of Senegal has been increasing milk production and empowering the herders.

Senegal, known as Pays de la Teranga or “land of hospitality,” is on the west coast of Africa. Although a comparatively prosperous nation, many of its 13 million citizens live with endemic poverty and food insecurity, not to mention the progressing Sahara Desert. 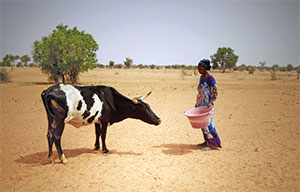 LUTHERAN CHURCH OF SENEGAL/DEVELOPMENT SERVICES
ELCA World Hunger works in partnership with Fedannde Jolof, an animal husbandry center in Senegal, to crossbreed cows that produce 2.6 gallons of milk per day. The “better” cows help families on their way to food security.

The Lutheran Church of Senegal has 5,000 members in a country where more than 95 percent of the population is Muslim. Yet cooperation is enjoyed and is a key to the dairy partnership.

In 2004 discussions began on how the local Fulani herders could better their lives. In the past, they had struggled during the dry season.

“I had a local cow which gave me milk that I was selling mostly during the rainy season to take care of some of my family’s needs,” said Ramata Ka, who lives in the village of Klimbe. “But it did not cover the family’s food ration or the children’s education and medical needs.”

Herders and the ELCA-supported Senegal Lutheran Development Service wondered if dairy operations could be made more sustainable and thus more profitable for the herders.

The result was Fedannde Jolof, an animal husbandry center. There the problem of cows not producing during the region’s eight-month dry season was addressed. Such periods can curtail nutrition for families and cause a drop in income.

The solution of crossbreeding cattle has yielded substantially more milk for the farm, which is run as a cooperative by the herders.

Under the partnership with the Senegal Lutheran Development Service, indigenous cattle raised by the Fulani were crossbred with Holsteins and other breeds. According to some estimates, families whose cows were producing as little as 2 quarts of milk a day during the dry season now produce as much as 2.6 gallons.

“Indeed, crossbred cows give more milk than local ones,” Ka said. “For example, with this single crossbred dairy cow, I milk [2.6 gallons] a day. This daily amount of milk allows me to cover the needs in milk for the family, to sell part of it to the mini-dairy unit of the [Fedannde Jolof], and to transform some of it into butter oil, which I sell for 2,500 CFA (about $5) per liter, whereas even three local cows cannot give me as much milk daily.”

One cow in the partnership can now bring in as much as $400 a month in products made from the raw milk, Ka added.

“Thanks to the program, I have four crossbred cows and a bull calf that I plan to feed and sell later, and, if possible, use the money to make the pilgrimage to Mecca,” he said.

The program improves the quality of life for the families of the herders, Ka said.

“It is programs like this that remind ELCA members what an impact mission support has around the world,” said Andrea Walker, ELCA area program director for Madagascar, West and Central Africa. “It is truly ‘God’s work. Our hands.’ as our offerings go to places we may never see, yet make a difference in the lives of our brothers and sisters around the globe.”

ELCA World Hunger by the numbers

Fedannde Jolof, an animal husbandry center in Senegal, is one of more than 200 programs in nearly 60 countries supported by gifts to ELCA World Hunger.

A crossbred cow from Fedannde Jolof can produce 2.6 gallons of milk per day — three times more than the average indigenous cow.

Income from the sale of milk and butter is enough to cover a family’s basic needs, like school fees and medical expenses.

In 2014, ELCA members and friends gave $4.6 million in ELCA Good Gifts to advance the work of ELCA churchwide ministries like ELCA World Hunger.