Megan Rohrer’s path to ministry could be likened to that of Jonah. Time and again Rohrer heard God’s call to become a pastor in the urgings of professors, pastors and friends. Yet saying “yes” meant facing challenges that the lifelong Lutheran wasn’t ready to meet upon graduation from Augustana College, Sioux Falls, S.D., in 2001.

Instead, Rohrer became a counselor at the Children’s Home Society in Sioux Falls. There the call came in the whisper of a 6-year-old boy who had tried to commit suicide for the 12th time. He confided to Rohrer: “I heard in church that if you’re bad, you’ll go to hell. I know that I’m a naughty boy. I want to kill myself first before I go to hell.”

The encounter pushed Rohrer in 2001 to enroll as a master’s student of theology at Pacific Lutheran Theological Seminary, Berkeley, Calif. “I realized I was going to have all these experiences happen to me,” Rohrer said. “I wanted to make sure no kid ever heard anything like that from a pulpit again.” 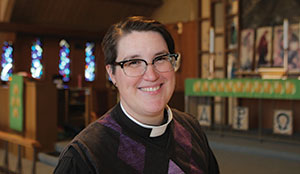 Meghan Rohrer, pastor of Grace Lutheran Church, San Francisco, is believed to be the first openly transgender pastor on the ELCA roster.

In the year that followed, Rohrer became executive director of Welcome, an organization of San Francisco congregations responding to homelessness in their community. In that job, God called again: the homeless people kept calling the graduate student “pastor.”

“I tried to correct them and afterward they’d just shake their heads and say, ‘Whatever, pastor,’” Rohrer said. “Then I decided that they have called me and I should finally give up running away from the whale. So I changed my study to the master of divinity.”

What held Rohrer back? Rohrer is transgender, an umbrella term for a diverse group of people who understand their gender to be outside the traditional definitions of male and female.

Nevertheless, Rohrer finished seminary, saying, “I had wondered if the Lutheran church would be able to have me in it, but I never wondered if I was a Lutheran. I’ve always had this deep sense in my gut that God was with me.”

Rohrer, however, could not be rostered in the ELCA, which prior to 2009 expected pastors to “abstain from homosexual sexual relationships” (Vision and Expections). On Nov. 18, 2006, Rohrer was ordained and rostered by Extraordinary Lutheran Ministries, an organization that works for the full participation of gay, lesbian, bisexual, transgender and questioning (GLBTQ) people in the Lutheran church. Next came a call from St. Francis, Santa Maria y Martha (St. Mary and Martha), Christ and Ebenezer Lutheran churches to work with Welcome.

That ordination and call was not sanctioned by the ELCA. That changed when the 2009 ELCA Churchwide Assembly voted for “a way for people in such publicly accountable, lifelong, monogamous, same-gender relationships to be ordained and rostered.” And on July 25, 2010, Rohrer was received onto the ELCA roster.

Rohrer is believed to be one of the first openly transgender pastors on the ELCA roster. This July, Asher O’Callaghan, a transgender person, was ordained at House for All Sinners and All Saints in Denver.

The pastor remains committed to serving and speaking out on behalf of individuals who are homeless. “The Bible says a lot that we should listen for God’s voice,” Rohrer said. “Spending time with the homeless was a place where I could listen to God’s voice in the world and be paying attention to potential prophets.”

Part of this commitment to the homeless comes from knowing what it feels like to be on the fringe and unsure if the church will welcome you, Rohrer said.

Members of Grace have been welcoming to their pastor, but the call has not been without challenges.

Last year a Presbyterian congregation that rented space at Grace took offense to Rohrer’s hiring in February 2014 and to the congregation’s welcome of LGBTQ people, said Grace council president Sally Ann Ryan. At one point the rainbow window clings Grace posted to express welcome were removed, she said.

As tensions rose, Grace’s members concluded “they didn’t want anyone to come to any service in their building where people didn’t feel welcome,” Rohrer said. “A congregation of almost all straight people said that welcome is the most important thing here.”

The Presbyterian pastor did not agree. After a 20-year relationship, the congregations parted ways in December.

The loss of rental income left a gaping hole in Grace’s strapped budget. With Rohrer’s leadership, parishioners organized “Grace Under Fire,” a benefit dinner to recognize congregations and individuals that welcomed LGBTQ people even when it meant facing great odds. The event raised more than $12,000 for Grace’s operating expenses.

Under Rohrer’s leadership, the congregation is trying new ideas for outreach and evangelism, from a Beatles worship service to the imposition of ashes in the subway station. Evangelism also expands beyond the congregation’s walls through a weekly online Bible study focusing on issues of justice in the lectionary readings. ELCA pastors Amanda Zentz-Alo and Dawn Roginski collaborate on the project, which reaches between 2,500 and 3,000 people.

“It has been so healing to be part of a congregation that loves you so much,” said Rohrer, reflecting on Grace. The pastor feels astonished by and grateful for the new ways church and society are welcoming LGBTQ individuals, but also thinks there is more work to be done. “

For a long time we didn’t talk about alcoholism or abuse or cancer. I feel like [being transgender] is like anything difficult that you go through. I hope the way that I serve as a pastor is that it never serves as a barrier or declaration,” Rohrer said. “Any time we can have pastors that embody the diversity of our full creation, our church is better for it.”

The Lutheran: What does it mean to be transgender?

Rohrer: Transgender is an umbrella term that includes a very diverse group of people who understand their gender to be outside of the traditional definitions of male and female. That is as broad as someone who is female and doesn’t want to wear a bra, all the way to someone who has had hormonal changes from male to female.

How many people are transgender?

While there is no accurate count, some say there are 700,000 trans individuals in the U.S. This number is likely low due to fear of violence, lack of family support or health care, and the desire of many trans people to keep their medical choices private. The best practice is to allow trans people the choice to self-identify.

How do I refer to someone who is transgender?

In church, I hope we see everyone simply as a child of God. In conversation, it is best to use the name and the gender or non-gender pronouns (they/their) they prefer.

What about people who say being transgender is a sin?

Thankfully, as Lutherans we believe God’s grace is more important news than who and how we are sinning. God’s baptism of the Ethiopian eunuch [is a] biblical reminder that God’s love stretches to include all of us.