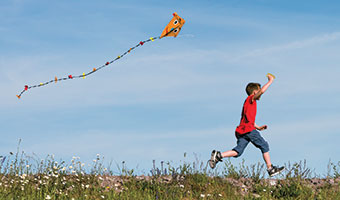 Child sexual exploitation can happen quietly and innocently … and affects both girls and boys. “There are so many children in this world [who] are trafficked, abused and exploited, and we’re at a great moment in history,” Hartman said. “We’re realizing what is going on with trafficking of children, and I believe our church has a role in preventing this. Years ago we might not have understood how it works, but now we do, and it’s an amazing time to be the church and lead change on this issue right now.”

Amy Hartman, a diaconal minister and founder of the Minneapolis-based organization that raises awareness of childhood exploitation through prayer, education, relationship-building and action, said this crime is often mistakenly thought of as a problem only outside the U.S.

But child sexual exploitation happens all over the country, she said, including Minnesota, where a high school cheerleader in the Twin Cities recruited a younger teammate into prostitution in 2013. It can happen quietly and innocently, she said, and affects both girls and boys. Some families even exploit their own children for money or drugs.

“There are so many children in this world [who] are trafficked, abused and exploited, and we’re at a great moment in history,” Hartman said. “We’re realizing what is going on with trafficking of children, and I believe our church has a role in preventing this. Years ago we might not have understood how it works, but now we do, and it’s an amazing time to be the church and lead change on this issue right now.”

The U.S. Department of Justice says this exploitation involves crimes of a sexual nature committed against juvenile victims for financial or other economic reasons. It estimates that sex trafficking victimizes more than 200,000 children in the U.S. annually, with an additional 244,000 to 360,000 at risk. Children are often the victims of brothels, sex trafficking, mail-order bride agencies, sex tourism, pornography, prostitution, stripping, lap dancing and phone sex companies.

Traffickers target vulnerable young people without good support systems — kids who are homeless, in foster care and runaways, Hartman said. The criminals frequently use manipulation to gain the young people’s trust, often contacting them online. Approximately 90 percent of children who are exploited were sexually abused prior to getting into prostitution. Fewer than 1 in 5 victims will ever report the crime.

Liz Macris, the parish nurse at St. Timothy Lutheran Church in North Greenbush, N.Y., has worked with Cherish All Children since 2008. She said it takes a village to stop the crimes of childhood exploitation, and parents and adults need to look out for all children.

St. Timothy first got involved by praying for all children. Members now work with community organizations like Fostering Hope Foundation, a Colorado-based organization that advocates for healthy outcomes for foster children. St. Timothy also adopted a foster family it supports by providing meals, grocery shopping and other assistance. Macris does wellness checkups for the children and, with her husband Jim, takes them out for birthday lunches and other activities.

Phyllis Morton, a 40-year member of Zoar Lutheran Church in Perrysburg, Ohio, has worked with Cherish All Children for three years. The congregation is near a busy interstate highway intersection, an area that’s convenient for traffickers, and has seen a lot of crime recently, she said.

Rattling off newspaper headlines — “Perrysburg Prostitution Sting Nets Nine Offenders”; “Undercover Sex Sting in Bowling Green, Ohio” — Morton said the congregation decided it was time to take action when a sex ring in Harrisburg, Pa., was busted and 77 children from Ohio were involved, including a 10-year-old girl. “It was a little too close for comfort,” she said. “We needed to do something about this.”

As a result, the congregation formed a committee and began doing temple talks in worship to raise awareness of child sexual exploitation. Last year, Morton coordinated a panel discussion for the community at Zoar, which is now a Cherish All Children partner and continues praying for all children.

How to get involved

Congregations all over the country are embracing Cherish All Children, said Hartman, who hopes more will get involved. A first step is to begin praying for children — either by name or in general.

All it takes to get involved is for one person in the congregation to spearhead the cause and get a few members interested, she said. Cherish All Children provides a handbook, phone consultation and “Encouragement Circles” where congregational leaders problem-solve with each other to move the ministry forward.

Involvement can be small, Hartman said. Her congregation, Our Saviour Lutheran in Minneapolis, provides snacks for a local survivors group.

“It doesn’t seem like much,” she said, “but it does let the women know we care. I’ve been told by a survivor, ‘I can’t believe that someone other than God cares about us enough to bring a snack every week.’”

Congregations might also consider raising awareness of sexual exploitation with employees and volunteers who work with their children’s programming. Lori Strang, pastor of Redeemer Lutheran Church in Toledo, Ohio, made sure that all who work with youth had child safety training.

“Too many of our congregants are unaware of the real implications and long-term effects of childhood sexual abuse,” Strang said. “There is so much misunderstanding about how to keep our children safe, and from whom. As churches, we have operated too loosely in the past with protocol for the protection of children.”