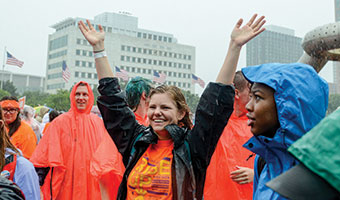 Click here to see all the photos from the 2015 ELCA Youth Gathering.
Photos by Chris Ocken.
At a neighborhood park in Detroit, Callan Geier, 17,  and David Philpot, 74, sat side-by-side on top of orange paint buckets, heads bent in conversation as they applied clay to the backs of painted squares and pressed them on the outside of a baseball dugout. The brightly colored fragments would eventually complete one of four mosaics designed for the city by local artist Hubert Massey.

This art installation was one of many service projects planned by ELCA volunteers and Detroit organizations as part of the July 15-19 ELCA Youth Gathering, a triennial event that aims to enrich youth in their faith journeys through worship, music, presentations, recreation and community service.

Geier, a member of St. John Evangelical Lutheran Church in Preston, Iowa, was one of 30,000 participants clad in candy-colored shirts who descended on the city of 688,701, a presence that garnered Detroit media coverage and even spawned the hashtag “skittlesexplosion.”

Like others, Geier marveled at seeing all the young Lutherans in one place. “We’ve been fundraising ever since the last Youth Gathering just to make sure we had the funds to come,” he said.

Philpot, a friend of Massey, said he and his neighbors had been preparing for the mosaic installation for months as well and hoped the visitors would see their city for what it really is: “Most people think that Detroit’s a scary place, but it’s a thriving place.”

In total, youth and their leaders worked alongside Detroiters like Philpot to paint 1,847 mural boards for vacant buildings, board up 319 unoccupied homes, clear 3,200 lots of debris, distribute 1,425 backpacks and build 99 picnic tables. With support from their congregations and Women of the ELCA groups, participants also donated 1 million diapers for a Detroit diaper bank.

Youth lent a helping hand and met Detroit’s people through their service projects, but they also experienced its restaurants and culture, spent time learning and playing in the Cobo Center, and danced and worshiped at Ford Field.

“I love it here. So far Detroit is bringing better experiences to me and opening up my horizons,” said Daquan Baker, 18, from New Hope Lutheran Church in Jamaica, N.Y.

Megan Bird, 18, Trinity Lutheran Church, Boyceville, Wis., said she appreciated the welcoming spirit of Detroiters. On her community service day, “everyone came out of their houses and was waving at us and cheering,” she said.

Bearing witness to what God is up to in Detroit was echoed in the teaching materials for this year’s Gathering, which was organized under the theme “Rise Up Together” and shaped by the Gospel of Mark. It’s a message Geier said his pastor (and father) stressed to the youth before they arrived: “Detroit doesn’t really need to be fixed — it needs people to share its story.”

Cassie Mattheis, 16, from St. Stephen Lutheran Church in Lenoir, N.C., was so moved by her experience that she composed in her blog a letter to Detroit when she returned home. By late July, the post had gone viral. In it she admitted she’d been expecting the worst, but wrote:

“I saw the opposite of what I expected. I saw bike riders and people reading books and children playing in the fountain. I saw so much life, even after mere minutes of being there.

“I sang in your streets and weeded your flower beds. I talked to your citizens. I heard your spoken word and the testimony of those who belong to you. I served and worshiped and learned and laughed in your city. And I fell in love with it.”

Emboldening young people like Mattheis to be storytellers who are “called and claimed as characters in and witnesses to God’s divine story” is a goal described in the Gathering’s theological statement. It was also the focus of Proclaim Story programming that brought together youth groups with others in their synod and with their bishop to reflect, discuss and worship.

For Jesse Groettum, 18, from First Lutheran Church, Alexandria, Minn., it was a transformative experience: “Over the past year I’ve become very busy and many times it can be easy to put faith on the back burner. [The Gathering] brought it back to the front and has been a reviving experience.”

Young people were also encouraged in their faith by musicians such as Lost and Found, Rachel Kurtz, Skillet and AGAPE*, and by speakers such as Steve Jerbi, pastor of All Peoples Church, Milwaukee; ELCA Presiding Bishop Elizabeth A. Eaton; and Luke A. Powery, dean of the chapel and professor at Duke Divinity School, Durham, N.C., who challenged youth to be “resurrection revolutionaries.”

Powery’s speech was a highlight for Heidi Hagstrom, director, who has been on the Gathering staff since 1997. This was Hagstrom’s sixth and final Gathering.

“Mark’s resurrection story is a story that empowers us to perpetually return to the road of discipleship to follow Jesus,” Hagstrom said. “I pray that ELCA youth embrace that call to action.”

Eaton rejoiced in seeing firsthand the faith of young people put into action. She characterized the Gathering as “hopeful — for this city and for our church. There are all kinds of signs of hope. People think that the youth are absent from our church, maybe because when they’re scattered it seems like they don’t make as much of an impact. They are present and they are so energized.”

Molly Beck Dean, former youth ministry specialist and assistant to the bishop of the Southeastern Pennsylvania Synod, is the new director of the Gathering, which in 2018 is scheduled for June 27-July 1 in Houston. Or as the Gathering’s Facebook cover photo now declares: “Houston, we have a Gathering.”

Prior to the ELCA Youth Gathering, two smaller leadership events were held July 12-15 in Detroit: the Definitely-Abled Youth Leadership Event (DAYLE) and the Multicultural Youth Leadership Event (MYLE). Both were designed to empower participants through worship, educational activities and leadership development. “Love Does” was the focus of MYLE, which brought together 500 young people of color and/or whose primary language is other than English.

Erin Strybis
Erin Strybis is a content editor of Living Lutheran and member of Resurrection Lutheran Church in Chicago. Find more of her stories on Instagram (@erinstry) and at erinstry.com.

Lectionary blog: We are just the vessel