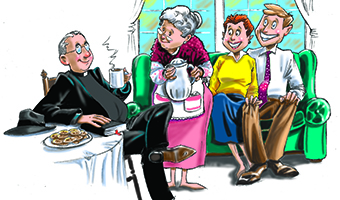 David Lose’s article “Inspiration for daily life” (April, page 12) unearthed for me the struggle of 10 years of ministry in two small-town Ohio churches.

Lose wrote: “In a culture that is increasingly participatory, our preaching is still primarily a monologue … too often [it] draws conclusions for our hearers rather than inviting them into the questions themselves.”

After a 14-year interlude in business, I returned to ministry by taking a call to serve two rural congregations. Average Sunday attendance was 12 at one, low 20s at the other. Most of the faithful were in their 60s or 70s.

How could I compete with nearby Lutheran congregations that had both traditional and contemporary worship services, live music, youth programs, and a staff to create newsletters and church bulletins?

By experimenting and making mistakes.

I struggled with my conscience: the egotistic desire simply to attract bigger numbers versus seeking spiritual guidance to serve the authentic need of ministering to the walking wounded, as priest and author Henri Nouwen might have put it. I decided to proclaim “a healing word for hurting people” as my message.

The first few months were spent calling on members, delivering a small devotional booklet as an excuse for knocking on their doors. Entering their living rooms, I discovered their hopes, dreams, heartaches and troubles. These visits enabled me to establish a personal rapport, but also shaped and inspired my preaching.

In Nature and Selected Essays, author Ralph Waldo Emerson wrote: “I once heard a preacher who sorely tempted me to say I would go to church no more. … He had not one word intimating that he had laughed or wept, was married or in love, had been commended, or cheated, or chagrined. … The true preacher can be known by this, that he deals out to the people his life, life passed through the fire of thought” (Penguin Classics, 2003).

It wasn’t until I listened to the voices of my people that I could relate it to my own spiritual quest. But how was I to make it participatory, as Lose mentions? I started by handing out a short list of questions following the sermon. Folks were invited to anonymously answer questions like these:

On other occasions I distributed with the bulletin an outline containing several blank spaces that could be filled in as the sermon was preached.

Having just emerged from an entrepreneurial business environment, I found myself approaching evangelism from a marketing standpoint and preaching as a kind of advertising. Gimmicky? Probably. But attendance grew.

As my people and I grew closer, they started to trust me. I made mistakes and they forgave me. One Sunday I used a sermon illustration that was obviously biased politically. A church council member called me to task and I apologized. The sermon isn’t the place to advance a political agenda that can be divisive. That belongs in an open forum, where people can express their views and not have to sit mutely while listening to mine without opportunity to comment.

Lose advocates for participatory preaching. I invited members to engage with me in dialogue sermons.

I also invited outside guests so they weren’t hearing only my voice. One Sunday, with fear and trepidation, I invited a Christian motorcycle gang to deliver the message, which was mostly in the form of personal testimonies. In a town of little more than 800 people, hearing 30 Harleys roar up to the Lutheran church drew a lot of attention.

Together we developed specific themes for Sunday morning services. On “Healthy Living Sunday” nurses took blood tests and blood pressure measurements. We honored the local volunteer fire department, grandparents or teachers. On “Make a Joyful Noise Sunday” everyone was invited to bring an instrument or noisemaker. The children paraded down the aisle with drums and a variety of instruments.’

During visits — in homes and at places of employment — I learned my members had stories to tell. Some talked about their conversion to faith. Others told about a miraculous event, struggles with doubt or the witness of a friend. With encouragement, they wrote about their experiences for our Lenten devotional.

This ministry provided a modest income, but in retrospect these were the 10 most satisfying years of my life. At times I wished we had a secretary to do the bulletin or newsletter. But these tasks got done. And as the combined attendance reached more than 100, volunteers began to step forward. It seemed we became a priesthood of all believers with many willing hands ready to volunteer.

Vocation: From worship to the world