Jeff Pierce, chief firefighter of Holden Village, stands before the fire that threatened the village during the summer months. Holden has for decades been appreciated by staff and guest as a place apart - flourishing without phone or, for many years, Internet service. Yet it was those things that kept an exiled community in touch this summer.

When Washington state’s Wolverine fire threatened the only road to Holden Village, staff of the Lutheran retreat center was evacuated to the ferry and down Lake Chelan. They became the first layer of Holden’s “community in exile.” The evacuation included staff of Rio Tinto, the company working to remediate the old copper mine that shares the isolated Cascade Mountain valley with Holden Village.

Christian community has been central to Holden’s mission for 54 years as guests and volunteers learned and worked together. As the fire devoured the forest, the community turned up its own heat with prayer, worship and shared stories. With Facebook, email and phone chains they encouraged the exiles and comforted each other as fire approached the village’s 1930s-era wooden buildings. 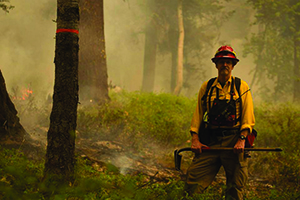 Jeff Pierce, chief firefighter of Holden Village, stands before the fire that threatened the village during the summer months. Holden has for decades been appreciated by staff and guest as a place apart – flourishing without phone or, for many years, Internet service. Yet it was those things that kept an exiled community in touch this summer.

Fire is natural in the Wenatchee National Forest, but the Railroad Creek valley last burned more than 100 years ago. Everyone knew the valley would burn someday. When 40 Forest Service Hotshot firefighters and five Holden volunteers went to work in the village, folks turned a Facebook page into a prayer circle.

Powerful sprinklers were aimed at the empty buildings while the Hotshots tore a perimeter break around the village and burned backfires to reduce fuel. Still, as the Wolverine moved forward, comments on Facebook became edgy and prayers more fearful. Some in the online community were awake all night, their postings full of grief and worry.

Worship is one of Holden’s daily disciplines, so groups large and small began meeting in churches and homes. Across the country people sang “Holden Evening Prayer,” the musical vespers by Marty Haugen. Social media was filled with announcements, photos and videos of worship gatherings.

Meanwhile, many evacuees felt disjointed and homeless. Many slept at nearby churches in Chelan and Wenatchee. They found emotional footing in the hospitality of friends and former Holden staff.

Along with regular reports from the directors, Holden’s pastor, Kent Narum, posted daily meditations written by those evacuated and membersof the wider community.

“Thinking about … the hospitality of all the people who have been helping us throughout our exile. … This support not only comes from the local congregation at Celebration Lutheran Church … it comes from the Holden community at large, of which each of you who is reading this is a part,” Piotr Szponder wrote.

Martin Wells, bishop of the Eastern Washington-Idaho Synod and a former Holden director, said, “The exiles deserve enormous credit as do the congregations, pastors and people of Chelan, East Wenatchee and other places who took them in. The extended community has opened its arms. This community inside and out is the heart of Holden.”

Preparations and the firefighters’ work paid off. The fire stopped at the edge of the village and gradually moved past and away from Holden. There was cautious jubilation online as dry conditions and the fire season would continue.

Within days the resort town of Chelan was surrounded by raging fires. Holden’s online community turned with concern and prayer toward all the towns besieged by fire, especially as the lives of three young firefighters were lost.

The Wolverine fire started the day after Chuck Hoffman and Peg Carlson-Hoffman were installed as the village’s directors. Throughout the crisis they signed their messages “With good courage,” a line from what many call the “Holden Prayer.”