Lutherans begin the story of the Reformation on Oct. 31, 1517. On the eve of All Saints Day, a German monk and professor, Martin Luther, made his concerns for the injustices he witnessed known in the form of the 95 Theses. He knew the sorrows of people who suffered physically from inescapable plagues, the tortures of famine and poverty, the endless violence of wars, but also spirituality — Christians were afraid of God and unsure of God’s design for their lives on earth and thereafter.

Firing up the engine of the word, Luther sought to return the church to its original mission. He led reforms of church practices and teachings that fueled people’s anxiety and put a price tag on forgiveness in the form of selling indulgences and required charitable contributions. The preaching-teaching theologian labored toreadjust people’s spiritual perspectives so they could confidently believe in a God of grace and experience God’s love as truly “theirs.” 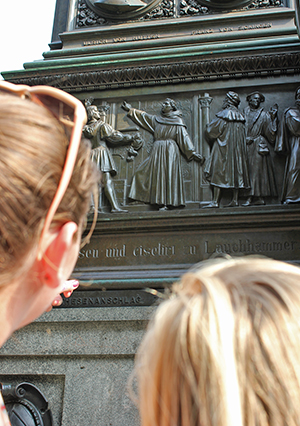 With his radical Jesus-based vision of Christian equality in grace-induced freedom, Luther taught that, in sin and in redemption, men and women are equal with different vocations.

Luther’s proclamation of the liberating power of the gospel jump-started a movement for promoting equality. In gender matters, the quest for full equality of women remains an ongoing battle. Luther’s vision of grace generates the spark for an uncompromising reformation toward justice, a reformation where human lives take priority over doctrinal disputes.

The reformer and women

Many women have found Luther’s message appealing and empowering. In 16th-century Wittenberg, women flocked to listen to the preacher and sought his pastoral counsel, especially mothers who had buried their unbaptized children, whose teenagers had eloped or whose husbands had left. For the empowerment of women in their vocations, Luther and fellow reformers established schooling for girls and secured a common chest that would have funds for widows, orphans and poor maidens.

Luther even offered hospitality to women in need at his home. A most difficult houseguest (per his own words) was the eccentric noblewoman Elisabeth von Brandenburg (1485-1555), who was exiled because she confessed to the Lutheran faith.

Luther’s teaching of marriage and motherhood as holy God-instituted vocations had an enormous impact on women’s self-worth. When he married (1525), Luther shared his ministry with his wife and had, in many ways, his theology tested with real life experiences. Through the women in his life, his view of God evolved. His last lectures on Genesis reveal his earnest fascination with all matters female and gender issues. His letters evidence his respect of the valiant reforming women who are “out there” in every community.

Women were central players in the Reformation drama. As mothers and wives, as daughters and friends, rulers and writers, visionaries and charity workers, and healers and weavers, women embraced reformation concerns and theologies on their terms.

With their hunger for meaningful spiritual direction and a desire to build a better world, women passionately responded to Luther’s novel preaching. Most famously, a young nun, Katharina von Bora (1499-1552), was so inspired by his sparkling pamphlets describing Christian freedom and responsibilities with a new tone that she left her safe convent. Little did she know that she would become the life partner of the most famous religious leader of the time and become a model for women taking control over their households as cradles of new Protestant faith.

Women transmitted faith to their children and surroundings in word, song and deed, especially in the home — their territory — which served as the church where they preached. For some, that wasn’t enough. Each needed to creatively negotiate around the many conventions regarding what “good” women ought to do or ought not to do. Women supposedly did not preach, offer the sacraments, lead, rule, write or disobey their husbands or fathers. In reality, they did all these things.

The Reformation principles of “Scripture alone,” “Christian freedom” and “equality in Christ” gave women a sense of authority to contribute more fully in the affairs of the church and to promote emancipation of others. They did so by their example of involvement but also by writing, even at the risk of persecution for that unsanctioned activity. The most illustrious female writers were Argula von Grumbach from Bavaria and Katharina Schütz Zell from Strasbourg, whose works enjoyed an astonishing circulation and were preserved in reprints.

As pioneering partners with the emerging Protestant forms of spirituality, women tested the renewed focus on forgiveness and grace in practice. Luther’s friend von Grumbach (1492-c. 1563), a noblewoman with small children, drew from the “Scripture alone” principle that gave her, a laywoman, the right to speak. She brazenly challenged in writing an entire (Roman Catholic) university for persecuting a young student because of his Lutheran association. In her view, killing a child or anyone for the sake of religion is never God’s will but simply a crime of injustice. She declared herself a confessor of faith on par with the learned men who refused to embrace Luther’s views.

Women participated in redefining the mission and borders of the church in its sharing of the gospel and gifts of grace. Female teachers were attentive to nurturing the transforming power of the word, especially in the lives of women they knew.

Olimpia Morata (1526-1555), a learned Italian, wife of a German pastor and a skilled translator, in exemplary ways cared for her female associates’ education via correspondence. Books were her children.

Marie Dentiere (1495-1561) from Geneva left her convent and emerged as a fiery defender of women’s rights in the church — and women’s corrective reading of the Scripture — as well as a shameless promoter of marriage over celibate life.

Similarly,  Shütz Zell (1498-1562), a pastor’s wife from Strasbourg, rose to fame with her fiery letter in defense of her marriage, clergy marriage and marriage rights in general. Her best-selling works varied from consolation texts to educational and meditative pieces, even a hymnbook. She proves that Protestant women defined for themselves how to express their faith and what their calling was as women of faith. With no biological children, she named herself the “church mother” who cared for those in need in her community at large.

The term “church mother” can aptly be used for German Duchess Elisabeth von Braunschweig-Lüneburg (1510-1558), who during her reign took care of implementing the Lutheran Augsburg Confession and a Lutheran church order in what today is Lower Saxony. She left an endearing motto: Children should obey God, the emperor and their mother.

Another towering figure, England’s Queen Elizabeth I (1533-1603), stands tall for her exemplary wisdom in negotiating the stormy waters as a Protestant ruler who was female and not married — unapologetic on both counts.

Until recently the matriarchs of the Reformation faith have remained in the dark. The approaching 2017 Reformation anniversary can rev up momentum for reforms in this regard. For the future of our Protestant traditions, knowledge of our mothers rewards us with new connections and alliances, insights and inspiration. They may surprisingly broaden our vistas on the meaning of Reformation — the core of which is justice.


Stjerna is professor of Reformation church history and director of the Institute for Luther Studies, Lutheran Theological Seminary at Gettysburg (Pa.).