Shaina Lidd, a Jewish American, and Mathilda Nassar, a Lutheran from the occupied West Bank, have a friendship that might seem unlikely to some. When they met and Nassar said she was from Palestine, Lidd didn’t say much.

Then a couple years later they got acquainted in one of their classes at ELCA-affiliated Roanoke College in Salem, Va. “I don’t know how it happened, but we became really good friends,” Nassar said.

Their friendship made it possible for them to have difficult, eye-opening conversations about Israel. “I hadn’t had a Palestinian friend,” Lidd said. “There have been tears and laughter. Just to know somebody, know why they think or believe what they do, makes everything more real.

”Their conversations led them to create “Israel-Palestine Peace Month” at Roanoke. 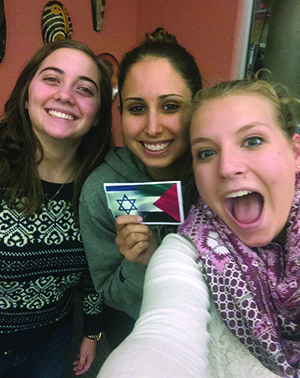 Peace Month got started when Nassar invited her uncle, Daoud Nassar, an activist and educator in nonviolence whose family runs Tent of Nations near Bethlehem, to speak on campus. She looked to Lidd and freshman Leah Weinstein, who is also Jewish American, for help “getting someone to present an Israeli perspective.”

“We wanted constructive discussion and dialogue, not blaming,” Nassar said.

Once it got rolling, the women involved faculty members in plans to present five events in spring 2015. The lineup included Maen Rashid Areikat, Palestinian ambassador to the U.S.; Shlomo Brom, retired brigadier general in the Israeli army; Lara Friedman of Americans for Peace Now; and Nassar’s uncle (he Skyped in from the West Bank).

“I have the feelings of any Palestinian, that the only way forward is a sustainable solution,” Nassar said. “I believe in peace, in coexistence and co-resistance. Together we act in resistance to the occupation and Israel’s denial of our human rights.

“With Peace Month, we went toward opening up dialogue on the campus for the first time to educate about the real Israel and the real Palestine.”

Nassar’s family experienced Israel’s 2000 military incursion into Beit Jala and Bethlehem. In 2003 they moved to Richmond, Va., and became members of Christ the King Lutheran Church.

Lidd, from Stafford, Va., said, “We have to find room to see each other’s side, hear each other’s story and say, ‘You’ve gone through a lot and I’m sorry.’”

For Nassar, the highlight of Peace Month was meeting Heartbeat, whose concert opened the event. The band is made up of young Israeli and Palestinian musicians who seek to build understanding and develop creative nonviolent tools for social change.

Areikat’s speech drew the biggest crowd — more than 200 people from the campus and community. Around 60 to 70 people attended the other events.

The ambassador told a local TV reporter: “My objective is to provide [the students] with a better understanding of Palestinian aspirations, what the Palestinians want to do, that we all aspire to live in peace.”

Both the attitudes and organizing skills behind Peace Month impressed Michael Heller, head of Roanoke’s peace and justice program. “It was an act of love and friendship, of caring about making the world a better place, and of activism,” he said.

Planning started midyear, Heller said, when it’s usually difficult to get much participation and budgets are already fixed. “The students called a meeting with the dean and several professors and the campus event planners, and the money needed — about $12,000 — just came in” from various departments, he said.

Nassar and Lidd’s efforts began just before spring break. They met to compare notes over coffee one day in Jerusalem, together with Weinstein. All three were spending the break in the Middle East. Nassar, fulfilling an honors program, was conducting interviews with negotiators in the Israel/Palestine conflict. Lidd and Weinstein were volunteering in Israel.

After the break, “Peace Month came to life extremely fast,” Weinstein said. “Mathilda and Shaina had a vision that this would be something special for the college. These speakers and discussions were going to challenge opinions and, hopefully, bring people together.”

Peace Month, Heller said, “grew out of friendship and the women’s desire for our campus to be more aware of possibilities for peaceful resolutions to conflicts in the Middle East. And it gave a boost to our peace and justice program.”

Heller hopes for more such events. Carrying that responsibility for now is Weinstein. Working with a Palestinian student yet to be identified, she will organize Peace Month 2016.

Both Lidd and Nassar have graduated from Roanoke as international relations majors and continue to keep in touch.

Lidd is moving to Jaffa, Israel, where she will work in predominantly Arab communities toward Jewish/Arab coexistence and peace.

As for Nassar, she will spend the next year in the West Bank. She is interested in getting involved with the ELCA’s Peace Not Walls campaign.

“I want us, the two peoples, to be able to grow up without fear or uncertainty,” Nassar said.