Daryl Hogbin admits his desk job is sedentary, he tends to be an introvert, and his fallback position on daunting tasks is that they are probably insurmountable.

So it surely surprised those closest to him when he decided to take a nearly 200-mile pilgrimage through France with someone he hadn’t seen in nearly 40 years, and to use that time to help raise money for the ELCA World Hunger’s Walk for Water.

The idea came to Hogbin, a member of Shepherd of the Hills Lutheran Church, St. Ann, Mo., soon after he reconnected with Eric Francois, who spent about a month with him in 1976 as a French exchange student. 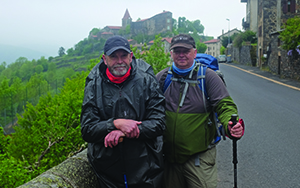 Eric Francois (left) and Daryl Hogbin made a 200-mile pilgrimage together. Here they stop at Saint-Privat d’Allier in south central France on the second morning of their journey along the Chemin de Compostelle.

Francois found his former host through Facebook a few years ago. Gradually the idea grew. Hogbin could cross off a goal on his “bucket list,” which was to visit the “Way of St. James.” Honoring the apostle James, people have made the pilgrimage for about 1,000 years.

The plan, though, seemed self-indulgent to Hogbin, so after talking with his pastor and others he resolved to give his trip more meaning. He decided to raise $2,500 for teens of his congregation to take to the ELCA Youth Gathering to help support water projects in places of greatest need. He also offered to take prayer cards from parishioners to hand out during the walk.

Hogbin exhausted all of his saved vacation and headed to France. “I had a bit of trepidation at the prospect of spending three weeks with a person that I knew just briefly as a 17-year-old and had not seen in 39 years, and with whom I did not share a common language,” he said. “The experience could not have been better. Eric was a wonderful host and traveling companion, and we came to know each other on a deep and personal level.”

Hogbin forged a friendship with his traveling companion and his children, and even attended the first communion of one of Francois’ three daughters.

Before that, however, Hogbin had to get through 190 miles, much of it traversed in sleet, rain and cold.

“The landscape from Le Puy en Velay to Figeac is rugged, remote and beautiful,” he said. “The weather for the first several days added to the challenge. One day while crossing the Aubrac, a high, mostly treeless plateau with more cattle than people, the wind blew at a sustained 30 to 40 mph for most of the day.”

Each day the pair met other pilgrims taking the journey, and there was a sense of shared faith. Back home, Hogbin’s congregation held a companion walk one Sunday to show solidarity.

“While walking I was able at different points to focus on the prayers and thoughts that I had brought along on index cards from nearly 50 people that made donations to the ELCA’s Good Gifts program,” he said. “I was definitely impressed with how caring and compassionate people can be.”

For Hogbin, the pilgrimage took him out of his comfort zone. In return he experienced a spiritual journey that at one time he would have considered nearly impossible.