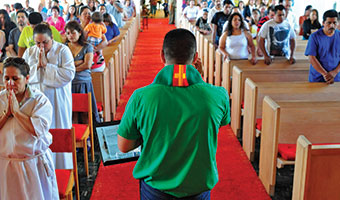 In the mid-2000s, Jhon Freddy Correa began attending worship at Emmaus Evangelical Lutheran Church in Racine, Wis. A former Roman Catholic priest in the Old Catholic Church in America, Correa wanted to start a Latino congregation in Racine and was looking for a place to sponsor him. 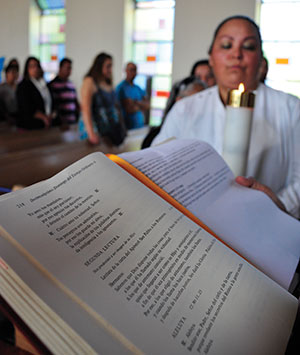 David Joel
Parroquia Emaús is a new congregation in Racine, Wis., that is focused on Latino ministry.

“Jhon persisted even though we had no money for that. But God provided,” said Mary Janz, pastor of Emmaus.

In 2009, Parroquia Emaús (Emmaus Parish) was established as a new ELCA congregation and today is a thriving Latino ministry led by Correa, who is now an ELCA pastor. The two congregations share the building and hold separate services in English and Spanish.

The seeds of Parroquia Emaús were planted 15 years ago when Emmaus started after-school and summer camp ministries for children in the three public schools that are within walking distance of its building.

The surrounding neighborhood was built up in the 1950s in what was then the edge of town. After 60 years of urban growth, Emmaus is now an inner-city congregation. Most of its original residents have retired out of state or have died. They’ve been replaced by new faces from Mexico, Africa and Latin America, along with second- and third-generation Latinos. 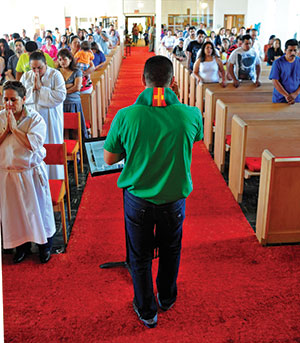 As mission developer, Correa built Parroquia Emaús on the foundation of Emmaus’ outreach ministries. Through their children, parents became involved with home Bible studies and prayer groups. Over time, people asked for a more formal worship experience. And it was important that it be in Spanish for practical or cultural reasons.

The challenge of coexisting

Janz says coexisting has been a learning process. For Emmaus, it means getting past barriers such as language, latent racism and uneasy feelings about undocumented immigrants.

For Parroquia Emaús, “it’s important that members develop and claim their own identity and voice, organize themselves and create the best possible way forward,” Correa said. “It’s a tricky balance between the two groups, to learn how not to be separate, but also to not let one group’s culture and energy overwhelm the other.” 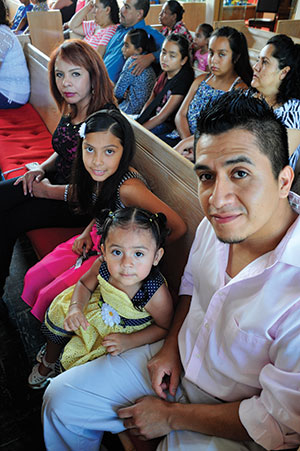 David Joel
Parroquia Emaús averages up to 200 for Sunday worship. Pictured here is the Chairez-Ramirez family.

But Emmaus has evolved and today Janz reports that members see Parroquia Emaús as an asset as both congregations focus on neighborhood outreach. Coming together with Parroquia Emaús, Emmaus’ members are broadening their knowledge of Latino culture and traditions.

And their presence is igniting hope. “The kids of Parroquia Emaús bring a lot of life and a lot of hope,” Janz said. “The parents are people of strong faith — to hear their stories is inspirational.”

Correa said Parroquia Emaús is successful because it’s a home away from home for immigrant families.

“Latinos feel included — they feel like family and, indeed, they are family,” he said. “They feel God’s love, mercy and forgiveness. They feel listened to. There’s a shoulder to cry on. Some felt rejected [in Racine] but now feel at home. They can be themselves, follow their own path in life and live in their own tradition in each moment.”

Ilse Merlin, 20, started attending Parroquia Emaús with her mother six years ago. She said the congregation provides a sense of acceptance that she didn’t find at other churches. Parroquia Emaús, she said, changed her whole life, giving her and her mother the courage to leave a dangerous living situation involving her stepfather. 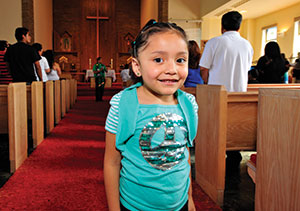 Now, as youth group leader, Merlin is learning how to reach out and make connections. She hopes to leverage her new skills and start her own business.

Parroquia Emaús works with two local colleges to provide courses specifically for the Latino community, including nutrition, family life and English as a second language. Two instructors were sent from nearby Milwaukee to meet the demand for GED classes. More than 70 people from the Racine community registered at Parroquia Emaús to finish the GED exam and are looking forward to exploring technical careers.

And the neighborhood ministries to children continue. Currently about 30 children are enrolled in the new congregation’s after-school program. About 70 children attend the free, five-week summer camp.

The relationship between Emmaus and Parroquia Emaús continues to evolve. Leaders from both groups are beginning discussions to become a new single congregation. While Parroquia Emaús averages up to 200 for Sunday worship, English services attract up to 60 per weekend. Some are wondering if continuing to move forward as separate entities is practical or feasible. One idea is to call one bilingual pastor to lead one congregation.

This will be a big step for Wisconsin’s oldest historically Danish church. Whatever transpires, Janz said, “the next chapter will be very exciting.”