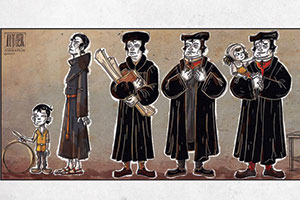 The first three episodes of Luther, the first-ever animated series capturing the life and work of Martin Luther, premiered in late August to an audience of 140 in Wittenberg, Germany. Commissioned by the Evangelical Lutheran Church in Hungary in anticipation of the 500th anniversary of the Reformation in 2017, the series will include 12 episodes.

A Q&A with the Rev. Dr. Robert Moore, ELCA representative in Germany