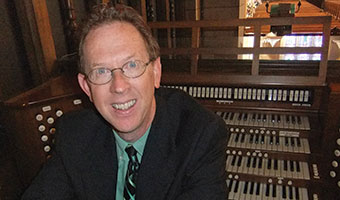 It was a once-in-a-lifetime experience for Robert Hobby when he was asked to compose two pieces of music for Pope Francis’ visit to the U.S.

Celebrated composer Robert Hobby had reached a point where he wasn’t accepting commissions for new music. Instead, he was choosing to spend more time with his family and to concentrate on his work as director of music at Trinity English Lutheran Church, Fort Wayne, Ind.

That’s before the call came — to help the pope.

True, it wasn’t a direct person-to-person with Pope Francis, but it was a call from the director of music at St. Patrick’s Cathedral. He asked Hobby if he would compose two pieces to be performed during the pope’s U.S. visit. 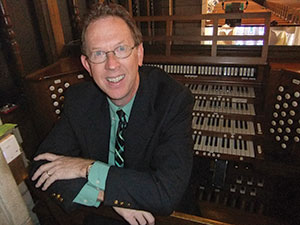 It was a once-in-a-lifetime experience for Robert Hobby when he was asked to compose two pieces of music for Pope Francis’ visit to the U.S.

Hobby’s moratorium on taking new work was put on hold.

“I was so ecstatic, but I didn’t want to get too excited before I was sure it was all happening,” Hobby said.

The son of a retired ELCA pastor and a graduate of Wittenberg University, Springfield, Ohio, Hobby grew up immersed in church life, and music became a big part of it. “I played my first wedding when I was in fourth grade, and I played at church on a regular basis when I was in fifth grade,” he said.

Still, Hobby was more interested at first in becoming an architect, a passion he found watching his dad attend meetings for new building projects.

“But doors just kept opening for me,” he said, regarding his music career.

What he thought would be a temporary stop at Trinity has turned into a 27-year appointment, where he oversees five vocal choirs for children, youth and adults; two bell choirs; two steel drum ensembles; and a recorder consort ensemble, along with an associate director.

More than 250 of his compositions have been published, but the call to write for the pope may be the biggest of his career.

Still, given the logistics and tight scheduling, several hurdles needed to be cleared before he got word that his new orchestrations actually would be performed — one at St. Patrick’s and the other at Madison Square Garden.

The first piece was a reworking of “Tu Es Petrus” (“You Are Peter”), by Charles Marie Widor, for organ and orchestra. The second, and perhaps most exciting, was the hymn “Alleluia, Sing to Jesus,” to be performed by a choir, an orchestra and the congregation.

“For ‘Alleluia, Sing to Jesus’ I spent time reflecting on the text alone. When I become more intimate with the text it becomes a spiritual journey,” he said.

Hobby received the honor of being present for the performance of both works, and he even got to sing in the choir at Madison Square Garden, giving him a chance to hear the mix of instruments and thousands of voices from an ideal spot. It also allowed him a closer view of the pope.

Though he is grateful for the prestigious commission, Hobby said all aspects of his Christian musical life are important.

“Regardless of whether I’m writing for some small element of a service with 100 people, or in this case writing for a lot of people, my calling is the same,” he said. “It’s to bring the glory to God, to see God in new ways and to be able to praise God in new ways.”