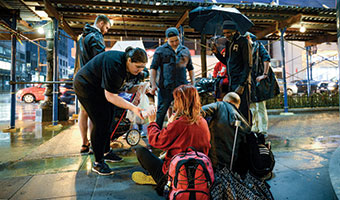 It’s a Sunday night in downtown Chicago and pouring rain. College students, outfitted with hoodies, ponchos and umbrellas, take turns pushing a shopping cart down the slick city streets. As they walk, they dodge puddles, stop and chat with people who look like they need a helping hand.

Not many people are out in these conditions, but the students come across a man and woman sheltering themselves from the rain under a storefront overhang.

“We also have hoodies,” another pipes in.

The couple says yes to both and the first student reaches into the shopping cart and selects two brown bags, each containing peanut butter and jelly sandwiches, juice and chips, and hands them to the woman. Just an hour ago, the students made and bagged this simple meal. The man has already stood up and is trying on hoodies, eventually selecting one before thanking the students.

This is “Takin’ it to the Streets,” a program of South Loop Campus Ministry, a joint effort of the ELCA Metropolitan Chicago Synod and the Episcopal Diocese of Chicago started in 2007. Led by campus pastor Ben Adams and two student leaders, the ministry has connected students from Chicago’s South Loop (primarily Columbia College Chicago, DePaul University, Robert Morris University Illinois and Roosevelt University) to service opportunities and faith-forming activities. It also connects them to their South Loop neighbors — in particular, those who live on the streets.

Kerrigan Tobin, a junior at Roosevelt, started participating in “Takin’ it to the Streets” to fulfill hours for her service fraternity, Alpha Phi Omega. Yet it soon became much more than that. “I was raised Catholic and ever since [I’ve come here] it’s bringing religion back into my life,” she said. 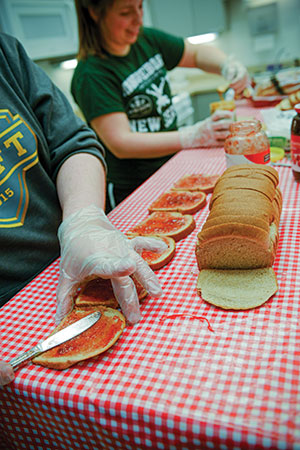 It started with a meal

South Loop students like Tobin have been “Takin’ it to the Streets” since 2012. It started with Tom Gaulke, then campus pastor, whose original idea had been to host a free meal to attract students.

“It didn’t work, but it did attract homeless people,” said Joe Hopkins, a United Methodist pastor who did his seminary internship with South Loop Campus Ministry.

Rather than waste food, Gaulke and the students gave it away. “From that point on, we figured we were on to something,” Hopkins said.

The ministry evolved into what it is today: a weekly bag meal and clothing distribution via the program’s iconic shopping cart. Sixty bags are given out each Sunday to people who live on the streets.

On the last Sunday of every month, volunteers host a community meal at Grace Place Episcopal Church, Chicago. As they prepare lunches before their Sunday night walks, students stamp the bags with the date of the community meal so neighbors know when to show up for a warm meal and conversation.

Asked if there was ever a night they didn’t “take it to the streets,” Adams quickly answered, “No.”

Even last February on arguably one of the coldest, snowiest nights in Chicago, Adams and a small group braved the weather to connect with people who hadn’t found shelter. “We go because we know that people will be on the streets in any conditions,” Adams said. 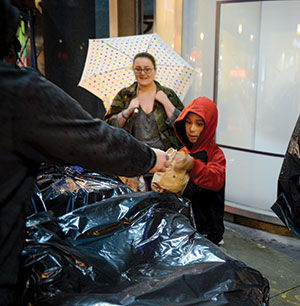 When school is out, visiting youth groups fill in for students who are away on summer break.

The goal behind “Takin’ it to the Streets,” however, isn’t just for students to participate in community service. “Through charity we are opening the door to create community with our neighbors,” Adams said.

Is it working? Adams believes it is. Each week as students encounter their homeless neighbors — people who are often ignored by the average passer-by — Adams has observed them growing bolder, first asking names, then hometowns and soon, deeper questions.

“The community meal is special. When you see people, you can get familiar with them and know them by name,” said Nick Bruenning, a senior at Roosevelt. “These are people — they have their own story and views on life.” Since participating in the program, his view of homelessness has changed.

Adams has noticed how the presence of young people has helped lift up the homeless people they encounter. Their friendship also offers a sense of accountability for those working to elevate themselves out of poverty. People who are homeless volunteer alongside the students at the monthly meal, each sharing their gifts, whether that’s running the kitchen (as one former chef does) or helping with setup and hospitality.

Building relationships isn’t easy, but time together at the community meal provides a space for students to care for the people they meet, and in turn receive care.

“A person asked me how I was — he was just so supportive. That’s beautiful to see in someone,” said Tobin, describing a community meal last school year. “It works both ways — as we are supporting them, they support us.”

Erin Strybis
Erin Strybis is a content editor for Living Lutheran and member of Resurrection Lutheran Church in Chicago. Find more of her stories on Instagram (@erinstry) and her blog, www.erinstry.com.