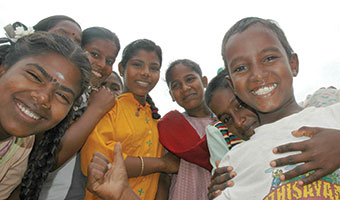 Editor’s note: In October, theologian Kirsi Stjerna reflected on the significance of the Reformation in light of the approaching 500th anniversary of Martin Luther’s launch at Wittenberg, Germany. She focused on some of the “mothers of the Reformation” and how women’s leadership in church and society has been bolstered by Reformation impulses. This month’s piece looks through additional lenses, noting the growing global reach of a theological movement within the whole ecumenical (catholic) church.

A flurry of publications and public events are building up to an important commemoration in 2017 — the 500th anniversary of what is regarded as the birth of the Reformation in and through the actions, writings, work and challenges of Martin Luther. It’s easy to imagine that Luther would be amazed at not only the 500-year existence of something called “Lutheranism,” but also the geographical expanse of the theological landscape he inspired.

“Refo500,” as it is being called, shouldn’t be seen as an exercise in nostalgia, but rather as an opportunity to reinvigorate and enrich the church. Much has happened in the last half of the millennium, not least the fact that the Reformation spawned movements, theological and geographical, that spanned the globe and carried the message of the cross and healing, of reconciliation and always being made new, of grace and thankfulness, of the dynamic witness of the Bible and grateful worship, to communities and places all over the inhabited world.

Even as we look back with gratitude and give thanks for all of this, we look forward with hope to what is yet to be. We also recognize that the vision of ongoing reformation needs to be enlarged as it continues to impact people and places in many and often unexpected ways.

A personal note: Both of us have strong links and ties to India, experiencing the richness of interreligious realities and the fact of the huge variety and range of denominations that mark the small minority of Christians (around 2.5 percent) there. This has impacted our teaching, writing and research in a variety of ways.

As a native of India, I’m conscious that as an ordained minister of the Church of South India, I embody in my religious being aspects of the worldwide range of ecumenical impulses that the modern Protestant missionary movement unleashed, including the Anglican, Presbyterian, Congregational, Methodist, and Lutheran traditions. I’ve been enriched by all that the ELCA has to offer and all that I have received, including its mission stance outlined in “Global Mission in the 21st Century.” It points to “accompaniment” as a model for mission and notes: “Walking together in God’s mission implies mutuality and interdependence. We journey together side by side, with neither companion ahead or behind, above or below, the other.”

This bold stance recognizes that sometimes those who choose to walk beside us are different from those we would choose to accompany. Such unexpected companions (think of the two surprised by their companion on the road to Emmaus) remind us we are all interconnected in God’s beloved global community.

One sign that the ongoing Reformation continues to impact churches and societies in different parts of the world was a recent international conference that I, along with two colleagues from the Lutheran Theological Seminary at Philadelphia, attended in August at United Theological College in Bangalore, India. The theme was “Revisiting Reformation: Explorations on Religion-State Relations Then and Now.” Scholars from several countries and a variety of denominational backgrounds, including Orthodox, Roman Catholic and Pentecostal traditions, participated.

Papers were presented on a variety of issues and themes ranging from Katharina von Bora’s role in inspiring the first Indian female missionary, to an examination of Luther’s and Mahatma Gandhi’s views on religion, politics and violence.

During the event we pondered how the doctrine of justification lays a foundation for interreligious dialogue. We didn’t shy away from how Luther’s diatribes against the Jews may relate to narrow exclusionist nationalistic tendencies in India and elsewhere today. Nor did we avoid asking how his ideas on liberty and some Reformation-era views applauding the state as secular savior may be interpreted in a variety of ways within contemporary political movements.

All of these issues and questions were examined from a global perspective, inviting fresh questions and resulting in new insights. Such fresh thinking about the Reformation’s ongoing import is a sign of what the church is growing into in the future.

Speaking of U.S. Lutheranism in particular, there is much that calls for repentance: our continuing lack of diversity is only the most glaring example in light of all that has occurred in our country this past year. But there also is much to celebrate: the push forward into a variety of ecumenical agreements, and an ongoing openness to interreligious engagement. We would venture to say that we have not forgotten our roots, but neither have we become “root bound.” Instead, we have grown into new soil — spreading deeper and wider at the same time. We have been transformed by these ecumenical and interfaith relationships, and we are a richer church for it.

Given the fact Lutheranism has become a global phenomenon, it’s incumbent upon those of us in the West to turn our gaze South and East. As we do so, it becomes evident that we are in the midst of a global “growth spurt.” Just as a teenager experiences both joy and pain as a body matures, so these global changes in the body of Christ are experienced differently in each context.

Even as many churches in Asia, Africa and Latin America are experiencing amazing growth, in our context we lament shrinking membership and fewer candidates for public ministry. For many then, it feels like the overriding characteristic of this moment in the church’s life is loss and diminishment. Many look rearward with longing, wishing we could turn back the clock and return to the time when both pews and offering plates were full. We understand this impulse, and we imagine that many in Luther’s time understood it, too, as they were struggling to learn how to be church in new ways, in the face of hostility and scorn.

Going back, of course, isn’t an option — and we shouldn’t want to even if it were possible since God’s Spirit beckons, “Come” (Revelation 22:17). Instead, we must be guided by theologian Karl Barth’s pointing to ecclesia semper reformanda est (“the church is ever-reforming”) and continue to move forward, responding to the Spirit’s call into the church of the future — a church we can’t yet fully see or imagine.

The church is and always has been about more than numbers — it’s not defined either by membership or dollars. If we have eyes to see, surely we can identify many signs of new life around us: exciting emerging ministries, nontraditional candidates for public ministry, a growing online presence in a multitude of venues and new global partnerships.

Another Latin phrase might guide us as well: ecclesia plantanda (“let the church be planted”), which was the motto of Henry Melchior Muhlenberg, the father of American Lutheranism. He believed the “old” church could thrive on the “new” soil of the territory that would become the U.S., and encouraged such adaptations of the church that would enable it to thrive in frontier conditions.

All true reformations are hard-won, but the fruits they produce are both lasting and surprising. Here’s to another 500 years.

Up Close and Personal: 5 lessons from a visit to Luther Country