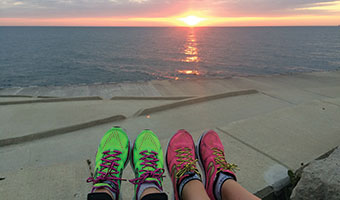 Lions, floggings, chains and imprisonment? Hebrews 11 has a long list of extreme persecutions, and they all seem so foreign. When have we faced a lion? It may be hard to identify with how these saints died, but facing death is part of our life in the church.

At my congregation on All Saints Sunday, we read the names of members and relatives who are now with the Lord. It could be a Hebrews list — it’s just as long. But one big difference between the biblical list and ours is how well we know these people. We know when they faced their “lions” and sometimes ran. But we also know that they faced death “with the sure and certain hope of the resurrection.”

We know that when Glenn died, we all thought his wife would never survive alone. She and Glenn had been inseparable. But she was in church the next Sunday and the next and the next.

When Sam died on that motorcycle 12 years ago, we know his parents lost part of themselves. But at Sam’s funeral we watched as his mother boldly proclaimed to a packed church that Sam belonged to Christ.


Jane Otte recently retired as executive director of prisoner and family ministry for Lutheran Social Services of Illinois. She now she writes, mentors, explores jazz interpretations of hymns and directs choir. She is married to Marlin Otte, pastor of Our Redeemer Lutheran Church, Marion, Ill.