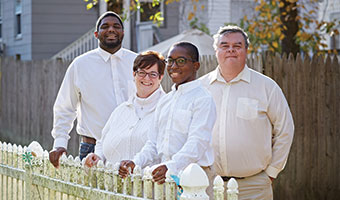 Bob and Kelly Higgs with their two youngest sons, Justin (left) and Christian, whom they adopted through a Lutheran social service organization.

Natalia Parker, 36, was 7 days old when she was adopted. Since her youth, she has known she wanted to adopt children. After Parker and her husband, Ron, had two children, a boy, 5, and girl, 3, she felt called to complete their family through adoption. They became licensed foster parents through Lutheran Family Services Rocky Mountains and “our lives forever changed,” she said.

Bob Higgs, a Presbyterian minister, married a widow with three children in 1998. Though the marriage didn’t last, he discovered something about himself. “I liked the stepdad thing and thought I was pretty good at it,” he said. “So when I lost my family through divorce, I began to think about what I wanted for my life.”

Neither Parker nor Higgs is Lutheran, but they both turned to Lutheran social service agencies when they were ready to expand their families. 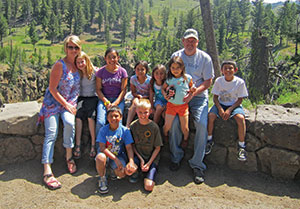 Natalia and Ron Parker and their eight children form a family of 10. After having two children, the couple felt called to adopt. They started out by becoming foster parents for Lutheran Family Services Rocky Mountains.

More than 300 Lutheran social ministry organizations in the country are part of a larger network called Lutheran Services in America. More than 100 of these agencies serve children, youth and families, with 33 providing foster care services and 23 offering adoption assistance. For more than 150 years, Lutheran social ministry has helped provide children with families and homes.

Today, Lutheran Services Society of Western Pennsylvania, which assisted Higgs, works to find families for the more than 101,000 children waiting nationwide. Many of these children are siblings who hope to be adopted together, staff report.

Three months after the Parkers became licensed foster parents, 15-month-old Jenna joined the family. “Just a few days after [Jenna] came into our home, we found out her birth mother was expecting another baby (who also became their foster child),” she said. “We had gone from having two children to having four children in just five months.”

Andrew was almost 13 when he arrived at Higgs’ home just before Christmas. He had been in the foster care system for four years.

“I had purchased a Christmas tree, but it was still in the box,” Higgs said. “When I came down the next morning, Andrew had assembled the entire tree.”

After Andrew’s adoption in 2003, his father asked him, “Do you want a brother?” He said yes, so Higgs again worked through the New Jersey agency to adopt a second child.

A year later, Higgs adopted Justin, 11, which made him think, “Maybe these boys need a mother. I was ready too.”

Through an online dating service, Higgs met and married Kelly. She had always wanted children so she adopted both boys, calling the decision “a no-brainer.”

“God blessed me with this woman to marry and adopt two kids and be their mom,” Higgs said.

In 2009, the Higgs adopted Christian, a 9-year-old who had been in foster care for four years in Delaware.

Meanwhile the Parkers, now with four children, received an email sent to all the agency’s foster parents seeking three days of respite care over Thanksgiving for four siblings. The couple responded, but the children arrived a week early and stayed for 14 days, not three.

“Holidays are really hard,” Parker said. “There are so many emotions and memories and expectations.”

A year later the couple adopted the four children and their family grew to eight children and two adults. “Although this was the craziest thing we had ever done, we were certain it was right,” she said. 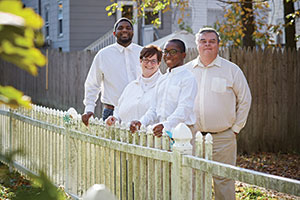 Bob and Kelly Higgs with their two youngest sons, Justin (left) and Christian, whom they adopted through a Lutheran social service organization.

“If you expect a perfect Brady Bunch experience, that’s not going to happen,” Higgs said of adopting older kids. Statistically half of such adoptions don’t work out. Especially rare is that Andrew finished high school and Justin finished college.

Parker agrees. “I don’t want anyone to think this is easy,” she said. “The trauma my children have experienced still rears its ugly head and tries to derail us.”

For the Higgs family, it was Lutheran Services in Pennsylvania and Lutheran Social Ministries of New Jersey. “I was impressed with both of them — their care, compassion, openness to handling unusual situations,” he said.

Parker said, “We are so grateful for the support from Lutheran Family Services Rocky Mountains. I felt so much frustration and was often overwhelmed. But my caseworker never judged me. I had moments when I was losing it. She saw me as a human being and supported me.”

The first night she collected the four siblings in a parking lot, everyone cried. “They felt scared, alone, lost and unsure,” Parker said. “They wondered why they had been sent away from yet another home.”

The oldest child noticed Parker’s tears and asked warily, “Do you always cry when other people cry?”

“I told her that when my people cry, I cry,” she said. “Today my children will tell you that in that moment, they knew I cared for them more than anyoneelse ever had.”