It seems almost routine. A lone gunman enters a school, mall or movie theater resulting in death, injury and community trauma. In cities, gun violence is a daily occurrence and is getting worse in some areas. While those who wield guns have the potential to control communities with fear, Lutherans are making an impact to bring peace back into their neighborhoods.

Dan Baldwin, a student at the ELCA’s Wartburg Theological Seminary in Dubuque, Iowa, said, “Gun violence stems from a mistrust, hatred or fear of the other person. The gun violence then perpetuates that fear, hatred or mistrust.” The effects of gun violence ripple out into the community — people are afraid that violence will visit them someday.

Baldwin recently served as a pastoral intern at First Lutheran in Cedar Rapids, Iowa, and was shocked by the casual attitude of the congregation’s children regarding gun violence. “I was not OK with kids growing up in a situation where they think gun violence is normal,” he said. 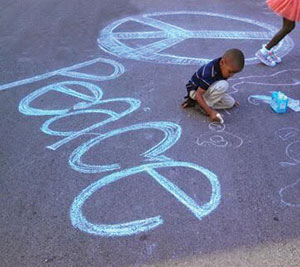 Lutherans around the country are organizing and holding vigils in response to gun violence in their communities.

Baldwin networked with neighborhood leaders, including the police, the Islamic center, a rabbi, members of the Baha’i community and neighborhood activists, resulting in an interreligious prayer vigil on July 12 to galvanize the community against violence. The event drew 175 people and received heavy media coverage.

As a result of the vigil, Baldwin said, “there’s more awareness of gun violence and more of a willingness to respond to it now that it’s more widespread than before.”

‘Faith and Action’ in Chicago

In May 2014, Chicago Mayor Rahm Emanuel called for a “Summer of Faith and Action” to reduce gun violence and asked the religious community to pray for the city.

Sharei Green, a member of Bethel Lutheran Church in Chicago’s West Garfield Park neighborhood, latched on to that idea and helped organize a vigil on May 22, 2014. Fifty people gathered in front of the church while dozens of other congregations and organizations held their own events. Green said local pastors offered prayers, the people shared their stories and there was a lot of discussion. 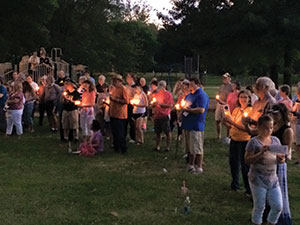 Lutherans, Muslims, Jewish people and members of the Baha’i community came together for the interreligious prayer vigil on violence prevention July 12 in Cedar Rapids.

The result of the citywide vigil was that for 36 hours there was no reported gun violence in Chicago. The event’s success at Bethel inspired the congregation to launch a nonviolence ministry. Monthly activities continue to raise awareness and “inform our community about what’s going on and how to be safe and to persuade people to not be afraid,” Green said.

She said it was important to reach out beyond the walls of the church: “It’s not like Lutherans are the only ones who experience gun violence. We have to get everyone involved because it affects everyone. Bethel has had a significant number of losses to gun violence — young people, specifically.”

Bethel incorporated nonviolence programming into existing events, such as the monthly community meal and the church picnic. It also partnered with neighborhood organizations to host a back-to-school rally that focused on safety. In addition to fun, food and celebration, Green said it was a time to talk about safety and lift up neighborhood victims of gun violence. They’re already planning the next rally in August 2016.

“We’re inspiring the community to take care of itself and to know that Bethel Lutheran Church is a safe haven,” Green said. “If you’re afraid or if you need help, we will stand with you and help them through whatever it is they may need.” 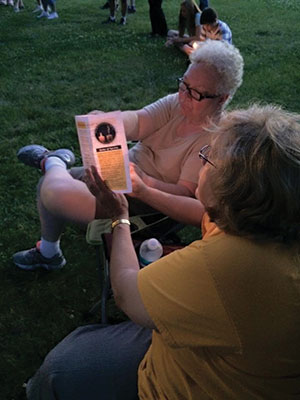 In Cedar Rapids, Iowa, 175 people attended a vigil to galvanize the community around preventing gun violence.

It’s not just cities that are affected. On the morning of Oct. 1, a gunman shot 18 people, nine of them fatally, at Umpqua Community College in rural Roseburg, Ore.

Faith Lutheran Church in Roseburg responded that evening with an impromptu prayer vigil.

Jane Baker, pastor, said the shooting “shocked people to the core. They wondered, ‘How could this happen here? What do we do?’ I realized that people may need a place to come to process and pray or whatever they want to do. There are questions here we’ll never have the answers to, most likely. As people of faith we have to be OK with that.”

The vigil included about 25 people. Baker said they read from Scripture, sang hymns and “opened it up to people to share their feelings. We prayed for the families and the victims. We prayed for our community to get through this.”

Baker organized the event “for those who didn’t want to be with thousands of people” at a citywide vigil held later that evening. She said it’s hard to talk in a crowd of thousands, adding, “I wanted to have something where people could express their feelings.”

The love of Christ

For those whose community might benefit from similar nonviolence activities, Green said, “Don’t be afraid. Fear is what’s holding people back from doing anything. God has not given us a spirit of fear. Your community will respond.”

Baldwin also emphasized a whole community response. “The love of Christ breaks down boundaries and the love of God crosses interreligious boundaries,” he said.

“What I saw in Cedar Rapids was a willingness for people to look past boundaries, stereotypes and labels and say that we are going to work together.”


More than 100,000 people are killed or injured by guns each year in the U.S., according to the Centers for Disease Control. What can we do about it? As people who follow Jesus, we can teach, preach, love, care and raise our voices to make a difference, save lives and make our communities and nation safer.