One Advent about 20 years ago, Fred Boettcher sold hundreds of wrapped gifts for $1 each in the narthex of Calmar (Iowa) Lutheran Church. Known as “Fred’s Gifts,” Boettcher supplied shoppers with novelties he had found at garage sales and thrift shops while raising hundreds of dollars for Lutheran Disaster Response.

And a Christmas mission tradition was born. 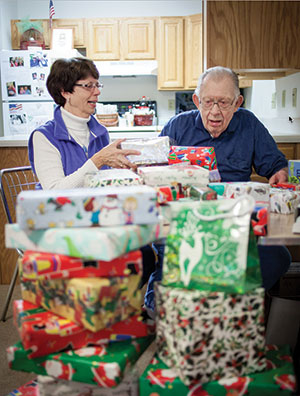 With gifts wrapped, Fred Boettcher and his daughter, Susan Boehm, are ready for his annual sale at Calmar (Iowa) Lutheran Church.

This year, with the help of his daughter, Susan Boehm, Boettcher, 90, had hoped to meet his goal of raising more than $350. In past years, his gifts have generated more than $500 — at $1 per gift, that’s a lot of shopping and wrapping.

“He talks about it as his mission,” said Phillip Olson, pastor of Calmar. “He has a heart for mission and clearly wants to feel useful regardless of age.”

The Fred’s Gifts display appears after Thanksgiving, and members shop through the last Sunday in Advent — or until the gifts are gone. Preparation is a yearlong endeavor that Boettcher, a retired high school history and drama teacher, has recently relied on his daughter to help accomplish.

“Now that he’s in assisted living, I have become his shopper,” Boehm said. “I bring him the gifts, cut the wrapping paper to size, and we spend some wonderful father and daughter time together wrapping.”

His daughter also serves as the relay person for those who supply him with donations of wrapping paper, tape and gifts.

Last year she helped a woman from out of state continue a tradition started by her mother of giving every family member one of Fred’s Gifts. The church secretary had forwarded the woman’s call to Boehm after learning it would be the family’s first Christmas after their mother’s death. Boehm helped her get the gifts in time for Christmas.

Boettcher and Boehm enjoy their father-daughter time while wrapping gifts.

“She was so happy to be able to continue this special tradition on behalf of her mother and support the mission fund,” Boehm said.

During his life, Boettcher’s activities constantly pointed toward mission support. In addition to Fred’s Gifts, he held multiple garage sales with profits donated to support the work of ELCA missionary Mary Beth Oyebade. And about 10 years ago he began repurposing electric blankets as quilt batting for Lutheran World Relief (to read “Boettcher’s quilt batting,” find this article here.

Boehm said her father has always had a servant’s heart: Sunday school teacher and superintendent, congregation council, building committee chair. While his wife was alive, he accompanied her on quilting days to sharpen scissors and serve coffee cake he had baked. He also was known as a skilled carpenter who was able to repair and repurpose items found on his regular garage sale and dumpster rounds.

“In Calmar, my father was known as the local dumpster diver,” Boehm said. “The kind of man who follows the garbage truck on its rounds to rescue items. Once he brought home four broken chairs and repaired them to make three that were like new. He’s just able to see value when others cannot.”

It’s a “salvation” tradition that has lived on annually at Calmar — enabling support for mission and bringing joy to others $1 at a time.

Joy M. Newcom
Joy Newcom is a member of  Immanuel Lutheran Church in Forest City, Iowa. She is the author of “Involuntary Joy: A Story of Unexpected Rebirth.”