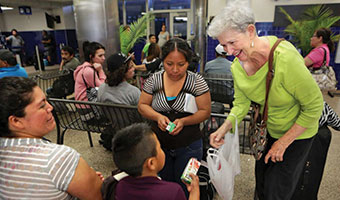 Janice Clayton from the Interfaith Welcome Coalition greets and gives a care package to immigrants in the San Antonio Greyhound bus station.

Like most days in San Antonio, it’s hot and sticky. Rosemarie Doucette is wearing her clerical collar, and her shirt is soaked in sweat and tears. She’s just come from the Greyhound bus station where she prayed over a Spanish-speaking immigrant family for safe travel. She is now standing in the front yard of a large mint-green house with white columns.

“The church, as a public witness, is called to welcome the stranger, feed the hungry and clothe the naked. Here they are,” she said, opening the door of a minivan. A Guatemalan woman and her children shyly get out of the van and are escorted inside the safe house.

Doucette volunteers with the Interfaith Welcome Coalition, a faith-based nonprofit in San Antonio formed last year to support the overwhelming surge of migrant children and young families coming over the United States’ southern border in the last two years. 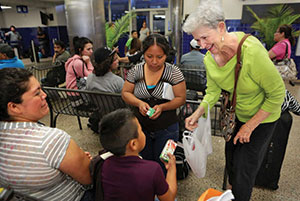 Janice Clayton from the Interfaith Welcome Coalition greets and gives a care package to immigrants in the San Antonio Greyhound bus station.

More are coming to the U.S.

According to Lutheran Immigration and Refugee Service, 68,000 children were taken into custody last year coming into the U.S. That’s up from 19,418 in 2009. More than 75 percent of those children are from Central America — El Salvador, Guatemala and Honduras — where rates of violence exceed that in recognized war zones.

“The stories are grizzly,” said Doucette, pastor of Good News Lutheran Church in San Antonio. “One woman had been attacked with a machete in her country. Family members have been murdered or have disappeared. Kids come home from school and never see mom or dad again. The drug dealers try to recruit the young boys because they’re expendable.”

Yanira Lopez Lucas, a 41-year-old woman from Guatemala, crossed the border near San Antonio with her children — ages 16, 14 and 5 ­ —in May. Immediately upon entering the U.S. they surrendered to Immigration and Customs Enforcement (ICE) and pleaded for asylum. 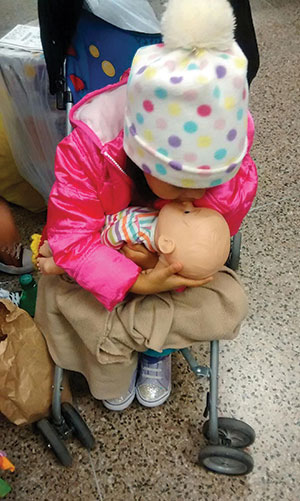 This girl and her mother are among many immigrants who risk the dangerous journey to the U.S. seeking safety.

Lopez Lucas made it clear that, given the choice, she would have stayed in Guatemala with her extended family. But she didn’t think her two teenage sons would survive.

“One doesn’t come [to the U.S.] because they want to come; one comes to ask for help,” she said. “The government of Guatemala cannot protect us. The same government is involved with the criminals. [We come] for the lives of our children because if we stay in our country, they could die.”

When Lopez Lucas asked for asylum as a refugee, it began a long process of paperwork. Unlike other forms of immigration, asylum can only be applied for once a person is on U.S. soil. Unlike illegal immigrants, Lopez Lucas’ family and thousands of others­ have crossed the U.S. border in search of legal protection afforded by the U.S. government to people who can demonstrate a “well-founded fear of persecution” or “credible fear” in their home country.

From asylum to home

When applications for asylum are approved, the families are released from detention centers and taken to the Greyhound bus station. As Doucette reports, the families didn’t always know where they were going. “[ICE] would just bring them to the bus station and dump them out,” she said. 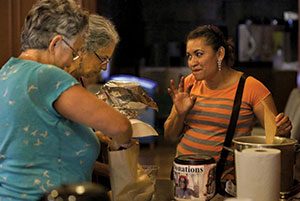 A refugee from El Salvador (name withheld for privacy) sells pupusas (similar to tamales) to women at the Interfaith Welcome Coalition meeting to raise money for travel expenses. She spent several months in detention with her son before being released.

The women and children were dropped off with a bus ticket. No money. No food. No cellphone to call their family at the other end to let them know when they were arriving. Whether for lack of understanding the English language or for lack of literacy skills, most couldn’t read their bus tickets. Some were taking a three-day trip by bus, with toddlers in tow.

Members of the Interfaith Welcome Coalition immediately saw a need to place volunteers at the bus station to help people through the process of getting to their new homes. The safe house was born out of the volunteers realizing that refugees were expected to sleep on the floor of the station with their children until their bus left, which in some cases could be days.

“When these folks arrive at the bus station, they have no expectations,” Doucette said. “They are just so grateful that people are here to help them.”

If Doucette finds a family who needs a place to stay until their bus leaves, she brings them to the safe house, which is owned by San Antonio Mennonite Church and staffed by volunteers from local Christian, Muslim and Jewish congregations. 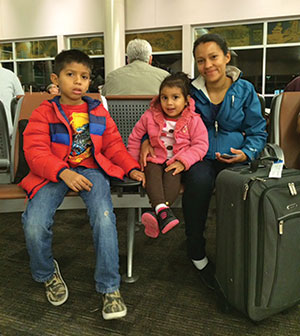 A mother and her children (names withheld for their privacy) wait for their bus to travel to stay with a sponsor family while preparing their case for asylum and appearing in immigration court.

“We bring them to this house and immediately we see the tension roll off their shoulders,” Doucette said. “They have a haven before they go off on a grueling trip.”

Before the families leave on their trips, the Interfaith Welcome Coalition provides them with a backpack filled with snacks, a hygiene kit and entertainment for the kids. Every night volunteers and refugees eat a meal together in the safe house at a large wooden table that seats 14.

Both the volunteers and the families who stay at the house feel a sense of God-given grace during this time together. “I thank God for good people who have helped along the way,” Lopez Lucas said. “They understand, truly understand, how families like us have suffered.”

For Doucette, it’s in walking with this suffering that she sees the gospel come alive.

“It’s modeling Christ,” she said. “When people see you feeding the hungry, they see that the gospel is still alive. After 2,000 years, it’s still the living word.”