Lance Lobuzzetta, staff member at the Sanctuary Art Center, and Sydney (last names of homeless withheld for privacy) make T-shirts to sell to support the center.

Brick spires on the buildings at the University of Washington in Seattle stretch to the sky, signaling shiny, boundless futures for the thousands of students traipsing to class.

But among the students on this campus and in the surrounding University District is another population: the homeless, whose futures are far more uncertain. 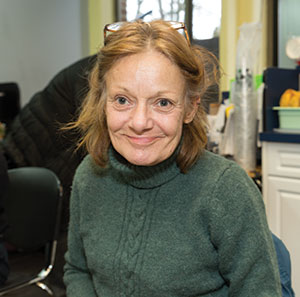 Women who are homeless head to long rows of old recliners in a basement hallway at University Lutheran Church, located on the fringes of the university in northeast Seattle. This is the Elizabeth Gregory Home, which has operated a day center since 2007 and was named for a former parishioner who was active in social service. Here the women fall into much-needed sleep. They will also find other help, such as meeting spaces, washing machines, food, a kitchen and mail delivery.

“Being homeless is the toughest job there is,” said Michele Martin, the center’s operations manager who was once homeless herself.

Meghan Gibson volunteers at the front desk of the day center, which last year served 612 women making 8,400 visits. She had been a client, too, homeless and looking for a place to wash her clothes. Gibson found what she needed to become stable and now attends a community college. She hopes to transfer to the University of Washington to earn a degree in public policy and says her education is the most important thing to her.

Younger homeless women and men are upstairs in several large art rooms at the church. They paint, make pottery and stencil designs to T-shirts at the Sanctuary Art Center, established about 2002. It’s safe and peaceful here. For a brief while, homeless youth can find refuge, away from the dangers of the street. 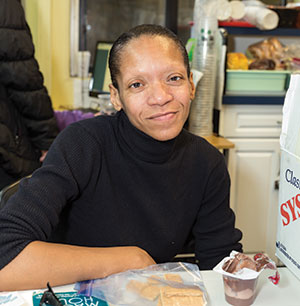 “It isn’t so much the art as it is the feel of the space,” Ron Moe-Lobeda, pastor of University, said of why the youth come.

The Elizabeth Gregory Home and the Sanctuary Art Center are only two of the ways University and its partners serve homeless people. Every corner of the church has something going on.

In one is the Women’s Shelter that the congregation hosts for SHARE/WHEEL, which is a partnership between the Seattle Housing and Resource Effort and the Women’s Housing, Equality and Enhancement League.

In another corner of the church, homeless young people estranged from their families or kicked out of the foster-care system are fed through a Seattle-area program called Teen Feed.

And then there is the second arm of the Elizabeth Gregory Home — transitional housing for women that began in 2006. Its current location, in a house a mile from the church, has room for eight women. It’s owned by the Low Income Housing Institute (LIHI), an affordable-housing agency. 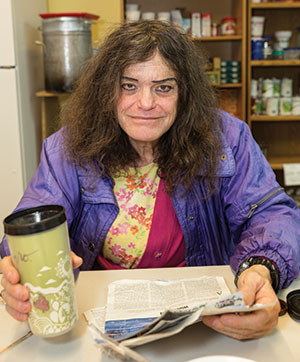 Because University is so strongly living out its mission to serve homeless people, the congregation received the Gertrude Apel Pioneering Spirit Award from the Church Council of Greater Seattle last year.

The congregation was already working with partners on feeding and housing programs for homeless teens when Moe-Lobeda arrived 19 years ago. “To see a congregation totally committed to a particular population of our society in that way was very impressive,” he said.

University is a good fit for Moe-Lobeda, who previously worked with those who are homeless at Luther Place in Washington, D.C.

Through the years there have been hard times that have threatened the existence of the Elizabeth Gregory Home’s transitional housing arm. Prior to the recession, the congregation raised $200,000 to house 11 women in an apartment complex near the church. When the economic decline forced staff layoffs and the home approached the brink of closure, another of many financial appeals was made to the congregation and community.

An extra $10,000 was raised from the congregation, which had already been giving approximately $60,000 annually to the Elizabeth Gregory Home. The less expensive LIHI location was found, and the transitional housing program survives in that form today.

In 2015 a large part of the Elizabeth Gregory Home day center was torn up to make way for showers and a medical services area in a corner of the church basement — a $250,000 project. The money came from a large gift from an individual, grants and financial reserves from the congregation.

“We are going to be inundated by more and more women,” Moe-Lobeda said. The future, he added, looks “fabulous,” referring to the congregation’s strong continued service to homeless people.

Lessons have been learned. While the Elizabeth Gregory Home has figured out how to deal with the ebb and flow of funds, parishioners and partners have learned to give to the cause generously and consistently. There always seems to be a way.